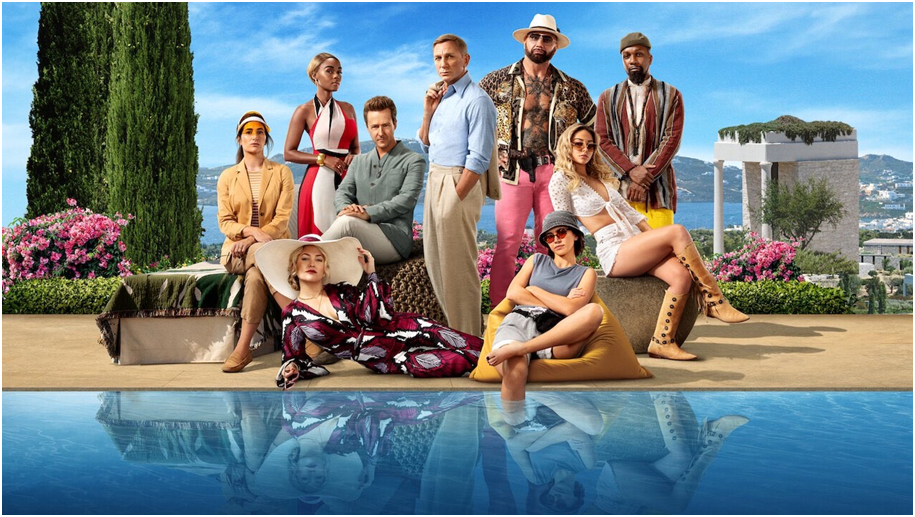 A new mystery must be solved by famed Southern detective Benoit Blanc (Daniel Craig) in the Rian Johnson written and directed film Glass Onion: A Knives Out Mystery which premiered on Netflix on Friday, December 23. The anticipated follow up to Johnson’s 2019 hit film Knives Out features an all-star cast placing Detective Blanc amid a murder mystery party where an actual murder occurs. It’s best to go into this movie with little information as possible to enjoy the mystery being unfolded, but paying attention to detail has never been more crucial.

Glass Onion: A Knives Out Mystery kicks off during the height of the pandemic, May 13, 2020, to be exact. The frustrations and isolation of lockdown comes to a brief halt for a group of friends who call themselves the “disruptors.” Miles Bron (Edward Norton), billionaire philanthropist and founder of tech company Alpha, invites his friends to his elaborate Greek island compound for their annual reunion which they’ve been doing for the past 8 years.

This time the reunion comes with a twist. The getaway is merged with a murder mystery party where the host Miles will be murdered, and his guests will have the weekend to solve it. Throughout the film you may think you’re getting the whole picture, but you’re only seeing parts of the story. The way the film is edited, which is brilliantly done by Bob Ducsay with cinematographer by Steve Yedlin, has the story all come together in the end. Once the mystery is solved, you’ll want to watch it again to narrow in on all the key details that were hiding in plain sight. I’ve seen Glass Onion three times already and the movie came out only a few days ago; it’s that entertaining.

Monáe’s major role in Glass Onion happens for the most part alongside Daniel Craig’s Benoit Blanc and the two play well off one another with a remarkable chemistry I wouldn’t mind seeing again in the future. Once you see the film you’ll understand why. Craig naturally steals the show as Blanc with his inquisitive mind on full display paired with the unmistakable Southern accent he does so well. Not to mention his Greek island attire which adds an additional layer to his character. Costume Designer Jenny Eagan did a marvelous job dressing Blanc as well as the rest of the cast to match their personalities so well.

Kate Hudson’s Birdie Jay was another stand out performance for me. It was great seeing Hudson act alongside her How to Lose a Guy in 10 Days (2003) co-star Kathryn Hahn again. I thought they would both elevate the humor in Glass Onion since they were so comedically great in How to Lose a Guy, but Hudson stole the show in the ensemble cast. With memorable one-liners like “What is reality?” and “It’s so dumb, it’s brilliant,” Hudson’s cadence and demeanor as Birdie Jay is perfection. The entire cast is a joy to watch, and Edward Norton plays an elitist billionaire blinded by his deemed genius well, but the top 3 performances go to Monáe, Craig, and Hudson.

A Knives Out Universe

Rian Johnson truly has struck gold with his Knives Out films. The initial film grossed a little over $3million worldwide at the box office in 2019. The success of that film lead to a streaming bidding war over the exclusive rights for future installments. Netflix ultimately won out making a $450 million deal for Knives Out 2 and 3. Yes, a third film will be coming and possibly more if the demand remains. As a lover of the 1985 film Clue, which Glass Onion reminded me of in many ways, I could watch a dozen of these films because the two so far have been standalone ideas that are only similar in Daniel Craig reprising his role as the famed detective. Each film brings a new mystery to solve and much like the game Clue, the longevity for Knives Out to keep going with different outcomes is countless.

Glass Onion is packed with unexpected celebrity cameos which makes this follow up more exciting compared to Knives Out, and the second installment was filled with more twists that left me pondering who was behind the murder in the film all throughout. I enjoyed the first film’s cast which had many heavy hitters like Toni Collette, Jamie Lee Curtis, Chris Evans, Ana de Armas, Michael Shannon, Don Johnson, Lakeith Stanfield, and Christopher Plummer.

Glass Onion superbly brought together another group of actors that were made for these characters and fit the premise accurately. Rian Johnson is becoming a master of mystery with the Knives Out franchise. He blends suspense and comedy so well in his films building the tension effortlessly leading up to memorable endings that stick with you making them limitless rewatches. It can only get better moving forward.

Glass Onion: A Knives Out Mystery is streaming on Netflix.