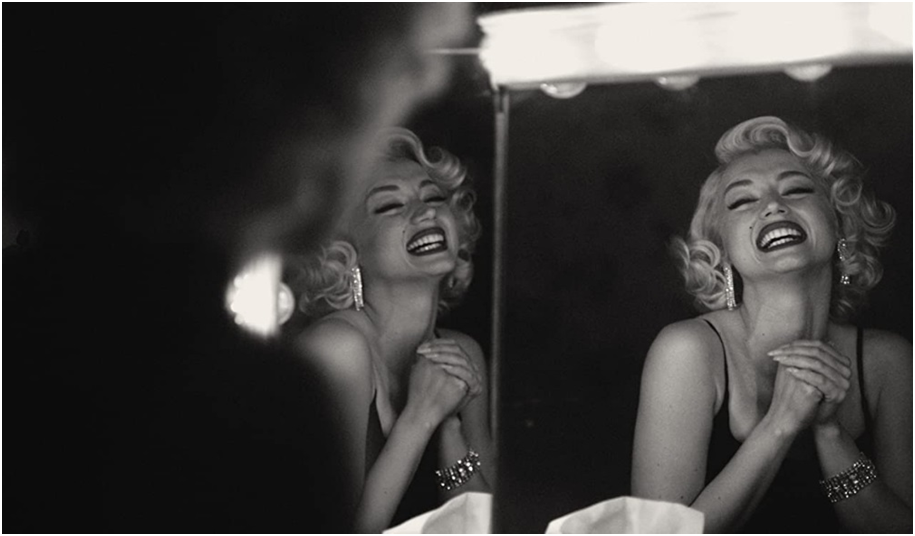 This article contains spoilers and discussion of abuse and abortion.
Marilyn Monroe, born Norma Jeane Mortenson, is one of the most iconic names in Hollywood and easily recognized as a public figure that spans generations. Monroe has been portrayed on the big, and small, screen by several actresses since 1976. Misty Rowe played her in Goodbye, Norma Jean (1976), Ashley Judd and Mira Sorvino played her in a dual role in Norma Jean & Marilyn (1996), Barbara Niven stepped into Marilyn’s shoes for The Rat Pack (1998), Michelle Williams won a Golden Globe for her portrayal of the blonde bombshell in My Week with Marilyn (2011), and most recently Kelli Garner played her in the mini-series The Secret Life of Marilyn Monroe (2015); just to name a few of the iterations.

Now, Ana de Armas is the latest actress to portray Marilyn Monroe on screen in the Netflix film Blonde. Based on Joyce Carol Oates’ 2001 bestselling novel Blonde, the film reimagines “the complicated life of icon Marilyn Monroe. Blurring the lines of fact and fiction, the film artfully explores the tension between her public and private life,” says Netflix. Directed and written by Andrew Dominik, Blonde has a running time of 2 hours 46 minutes and is the first NC-17-rated film on the streaming service (which is hard to believe with the 365 films on there) and has been described as an “avalanche of images and events” by Dominik. Adrien Brody, Bobby Cannavale, Evan Williams, Xavier Samuel, and Julianne Nicholson appear in the film playing key roles in Marilyn’s life.

My adoration for Marilyn Monroe was through her work on the screen. My mom and I would watch movies of hers in my younger years and through that my mom never missed an opportunity to buy me anything that plastered Monroe’s face including ceramic plates or mugs, tote bags, posters, and collectable dolls. Clearly, I’m a fan, but I never knew too much about the woman behind the façade of the glamorous actress. Since Blonde blends reality and fabrication, I watched the film cautiously knowing some things were dramatized and viewers should do the same.

Blonde starts in Los Angeles in 1933 and spans the highs and lows in Monroe’s life until her death in 1962. Viewers meet a young Norma Jeane (Lily Fisher) at the beginning of the film and how she craved a relationship with a father who abandoned her and endured abuse from her mentally unwell mother Gladys (Julianne Nicholson) until she was placed in foster care. The film jumps quickly to her adult life and how her vulnerability was taken advantage of throughout her career and how she was a victim to levels of more abuse (domestic, sexual, and verbal). “Marilyn doesn’t exist. When I come out of my dressing room, I’m Norma Jeane. I’m still her when the camera is rolling. Marilyn Monroe only exists on the screen,” is said by de Armas in character in the film and that is depicted much throughout the movie. So many people saw Marilyn as a sex symbol and a plaything to be used and abused; Norma Jeane was often forgotten and dismissed.

The film overall seemed copy and paste in that it didn’t feel like a continuous story but more of moments pinned together. Andrew Dominik describing the film as an “avalanche of images and events” makes sense in the notion that it views as infamous pictures from Marilyn’s life and career fleshed out in narratives giving them a backstory of what led to that moment to be captured. The back-and-forth use of having the film in color and black and white was strange and didn’t add anything cinematically to Blonde.

The best thing about this film is simply Ana de Armas. Ana had Marilyn’s mannerisms and breathy voice down effortlessly and many of the shots of Ana looked so identical to Marilyn I was questioning if archival footage was being used – it was that good. Ana did an exceptional job portraying the devastating and lonely life Marilyn lived outside of the limelight. If you’re a Marilyn Monroe fan or simply curious to see yet another depiction of her rise to fame, then be prepared for a lengthy film that doesn’t shy away from how Marilyn was mistreated her entire life and the bittersweet journey she went on to becoming one of Hollywood’s greatest icons.

Blonde is streaming now on Netflix.