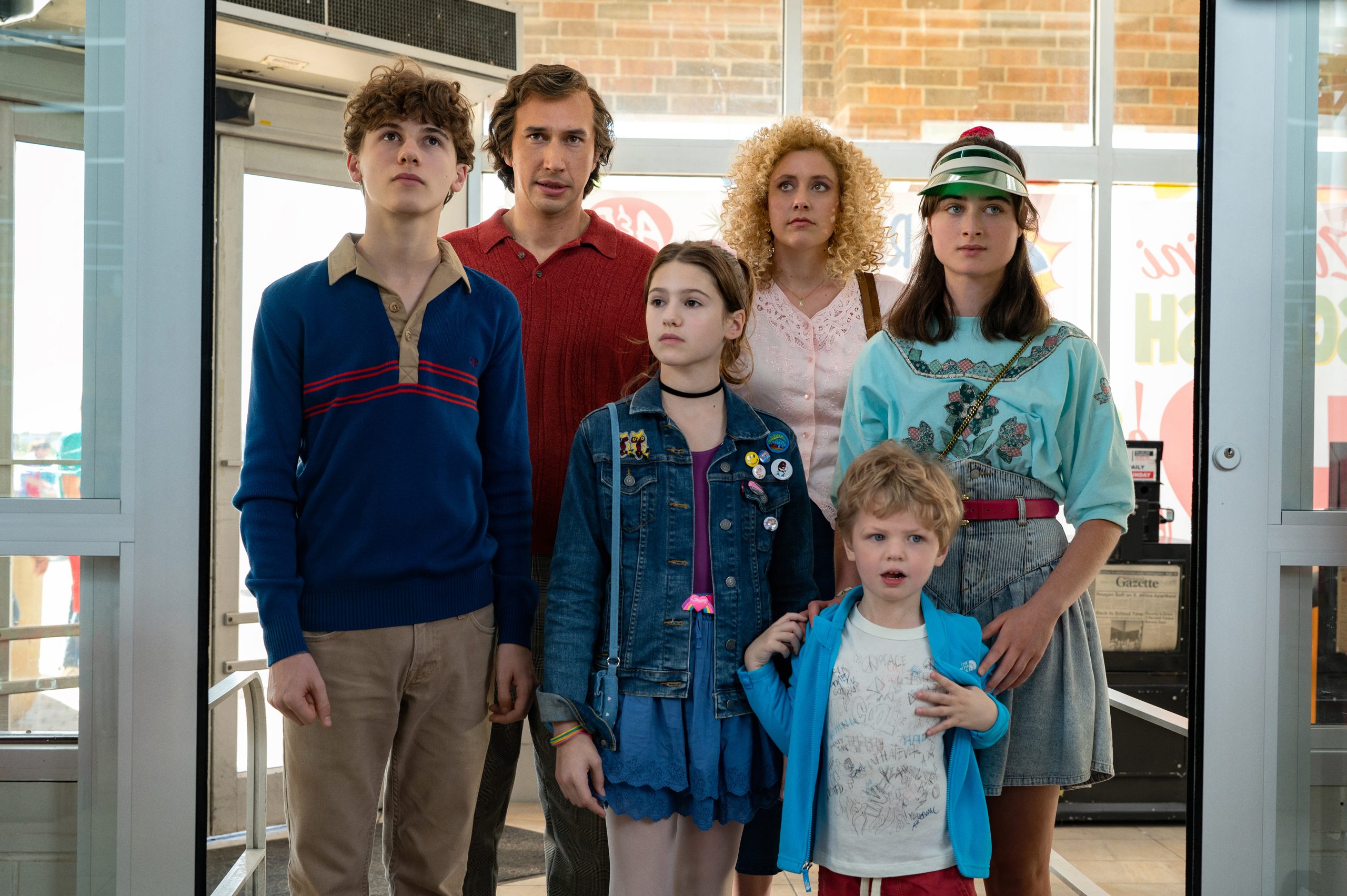 This review contains minor spoilers.
Noah Baumbach’s 12th feature film, White Noise, sees the Academy-Award nominated filmmaker branch out in new directions. Based on the 1985 novel of the same title by Don DeLillo, White Noise marks the first adaptation for Baumbach. The novel is considered by many as a definitive postmodern text thematically centered on science, technology, consumerism, and fear of death.

The budget for the Netflix production was reportedly over $100 million – a considerable increase compared to his previous films, many of which were independent (The Squid and The Whale, Frances Ha, While We’re Young). To put things in perspective, Baumbach’s last film, which was also a Netflix production, was 2019’s Academy-Award winning Marriage Story with a budget of $18 million.

The film is divided into three parts: Part 1 “Waves and Radiation”, Part 2 “The Airborne Toxic Event,” and Part 3 “Dylarama”. Part 1 introduces the viewers to Jack’s academic career at the college and the mundane life of the Gladney family as they head to the supermarket and prepare for dinner. Meanwhile, nearby, a truck crashes into a train carrying toxic chemicals leading to a massive explosion. This results in the development of a black cloud of smoke which can be seen from the Gladney’s home causing concern among the children.

Eventually an emergency evacuation is announced and the Gladneys rush to their station wagon in a panic. This leads to Part 2, “The Airborne Toxic Event”. The family finds refuge at a camp site, but Jack realizes he may have been exposed to toxins from the rain when he was filling up the car with gas. We begin to see masks handed out and people panicking about the toxins in the air.

It’s obvious that the covid-19 pandemic had an influence on Baumbach’s decision to adapt White Noise into a film given the prevalent lockdown and quarantine themes in Part 2. Baumbach enters new territory in his filmmaking with Parts 1 and 2 which rely on visuals assisted by CGI and some Spielberg-esque action/thriller scenes. It quickly becomes evident why there was such a large budget. Part 2’s pace is the fastest out of the 3 and feels more like an apocalyptic short film which makes for a fun ride.

Part 3, “Dylarama,” slows down its pace and focuses on the aftermath of the “Airborne Toxic Event” with Jack trying to get Babette to be honest with him about what she’s been hiding. Throughout Parts 1 and 2 Babette is seen taking pills secretly and avoiding any conversation about it. This part of the film represents the style Baumbach is known for which centers on character development and metaphorical dialogue. It becomes apparent during this final part that the central theme of White Noise is the fear of death and how that fear can profoundly affect our lives and the decisions we make.

It’s difficult to categorize White Noise as a film due to the multilayered themes and blend of genres throughout. This isn’t a negative observation. The themes and genres eventually weave together to relay the message that our lives are simply surrounded by everyday “white noise” and we should cherish them, no matter how monotonous they may seem. This point is really driven home at the end which features upbeat dancing in the supermarket to LCD Soundsystem’s newest song, “New Body Rhumba.”

White Noise is a dire reminder that death is inevitable and that we shouldn’t harp on that painful fact. In light of what the world has experienced during the covid-19 pandemic, this message will certainly resonate with many.

White Noise is streaming on Netflix.

Helen Roumeliotis is the Editor-in-Chief at Popternative and currently a PhD candidate in Cultural Mediations at Carleton University. She enjoys writing and learning about how pop culture can be used as tools for education. You can follow her on Instagram @helenroum.