Home / Entertainment / Review: The Twist in ‘Don’t Worry Darling’ is Exactly What You Think, But There’s More to The Plot Below the Surface 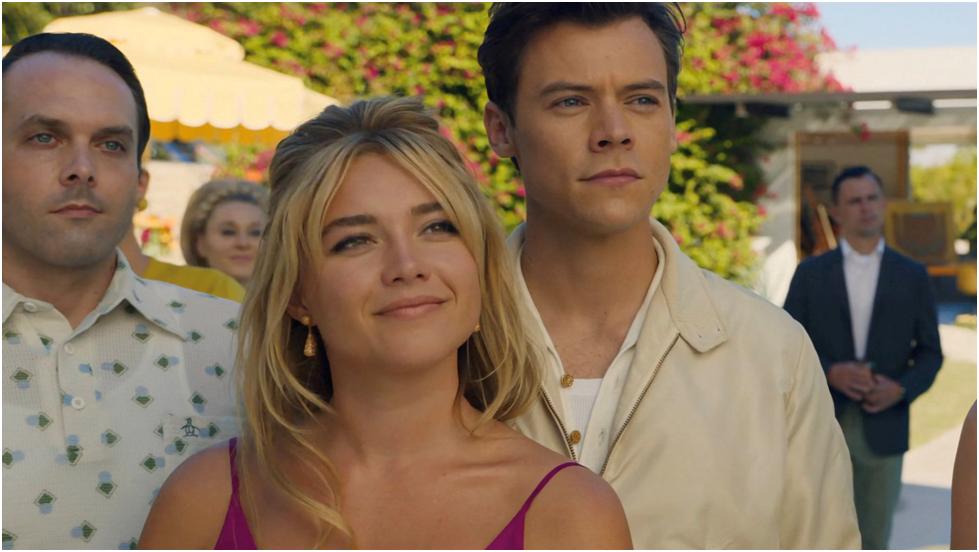 If you’ve been on social media remotely over the past few weeks, then I’m sure you’ve seen the drama circulating around the psychological thriller Don’t Worry Darling. In her second directed feature film, Olivia Wilde took on the helm along with having a key role in the movie centered around a1950s housewife living with her husband in a utopian experimental community.

There were rumors of disputes between the cast and crew that made for an uncomfortable set and the allegations were fueled even more during an awkward series of events when promoting the film (just search “spit gate” if you’re curious), but none of that was going to overshadow going into this movie experience. The trailers looked exceptional and the premise was intriguing enough to overlook any farce that happened behind the scenes.

*Spoilers ahead, proceed with caution if you have not watched Don’t Worry Darling

Don’t Worry Darling (DWD) is a different pace and world compared to Olivia Wilde’s 2019 coming of age comedy Booksmart starring Kaitlyn Dever and Beanie Feldstein, but her directing style of telling a compelling story with interesting characters remains the same. DWD stars Florence Pugh and Harry Styles as Alice and Jack Chambers, a happily married couple in the picture-perfect Victory community. The pair are madly in love, have an adequate sex life, and display the “traditional” roles of husband and wife as Alice preps meals, cleans the house, and spends her days lounging pool side and shopping with her bestie Bunny (Wilde) while Jack whisks off to work every day at the Victory Project Headquarters with the other men in town.

Victory Project CEO Frank (Chris Pine) serves as head of the neighborhood alongside his wife Shelley (Gemma Chan) who lives a mysterious life of intrigue with the other community members: Dean (Nick Kroll), Bunny’s husband, Peter (Asif Ali) and his wife Peg (Kate Berlant) and newest Victory couple Bill (Douglas Smith) and Violet (Sydney Chandler). The idealistic lifestyle begins to crack when Alice’s former friend Margaret (Kiki Layne) appears to suffer a mental breakdown pacified by her husband Ted (Ari’el Stachel) and Dr. Collins (Timothy Simons). Alice begins to question what’s really being worked on at the Victory Project Headquarters and Frank’s true intentions with the film really picking up from there.

The glamourous costumes and vibrant backdrop of Victory mimic the 2004 film The Stepford Wives, but the overall plot is like the 2017 USS Callister episode of Netflix’s Black Mirror. In USS Callister, Robert Daly (Jesse Plemons) leads a boring life as an overlooked Chief Technical Officer at Callister Inc. New employee to the company Nanette Cole (Cristin Milioti) is an admirer of Daly’s work and piques interest in his obsession with Space Fleet, a Star Trek type TV show. Unfortunately for Cole, she becomes the latest employee whose consciousness is digitally replicated and trapped inside a simulation of Space Fleet to be at the mercy of Daly’s controlling alter ego Captain Daly. Daly comes and goes as he pleases, while his victims remain stuck to be the playthings at Daly’s whim. It was no shocker that Victory was a simulation not actually set in the 1950’s and Frank was the mastermind behind it all, but just how in-depth other people in Victory were privy to the vile intentions of the project’s purpose was daunting.

Watching the film, it’s easy to be spellbound by Pugh’s performance as Alice and her tense scenes challenging Pine’s character Frank. Styles’ portrayal of a dotting husband with sinister intentions was believable despite the many social media commentaries that say otherwise. Did he have award winning moments, no, but for his first leading feature film role Styles held his own opposite established actors. The main threat I picked up on in DWD is a man’s unyielding mindset to want to control women and how some are complacent, even women, with the notion. The men of Victory have trapped their wives in a world where they can be exactly what they want and maintain a disguise of happiness while the reality of their lives is the complete opposite.

With Jack and Alice, we find out Alice is an overworked surgeon with little affection or time for an unemployed Jack. Jack discovers Frank’s podcast which informs him of the Victory Project. He proceeds to kidnap and trap Alice for them to go into the simulation and live a perfect life with no consent on Alice’s part. Although it isn’t shown, it’s an assumption that’s how all the wives got to Victory except Bunny who chose to be there where she still has her children (it’s implied they died in reality). There are still some questions I have that lingered in my mind post credits. Were the hallucinations Alice experienced due to the simulation glitching? Was Shelley also complacent in the Victory Project? And why was the simulation breaking down just because Alice figured it out?

Gaslighting, suicide, electroshock therapy and other disturbing displays of violence could be triggers in the film. Despite the problematic enigma of the underlying themes and the drama behind the scenes, Don’t Worry Darling brings vibrant cinematography splashed with breathtaking landscapes and scopes paired with a gripping performance from Pugh that makes it worth seeing at least once in the theaters.