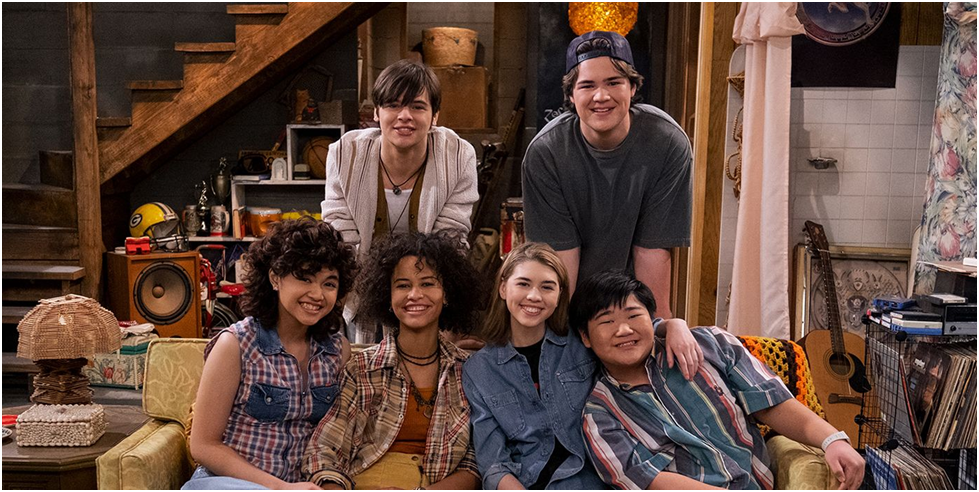 That ’90s Show. Photo by: Patrick Wymore/Netflix
From 1998–2006 we were hanging out down the street in Point Place, Wisconsin while watching That ‘70s Show. Created by Mark Brazill, Bonnie Turner, and Terry Turner, the series followed a group of teenage friends and their comical mishaps while living in 1970s Wisconsin. Eric Forman, played by Topher Grace, and his friends often hung out in the basement of his parents’ home, Red (Kurtwood Smith) and Kitty (Debra Jo Rupp), while experimenting with drugs, alcohol, and dreaming about life outside of their small town.

The show was a beloved sitcom and tried to continue the success with a spin-off series with That ‘80s Show in 2002, but it didn’t go past the first season. So, when word came out that another attempt to recreate That ‘70s Show magic was revealed, I had my apprehensions, but I’m glad to write that That ‘90s Show surprisingly surpassed my low expectations for the new iteration; which premiered Thursday, January 19 on Netflix.

That ‘90s Show kicks off in July 1995 as Leia Forman (Callie Haverda) goes to visit her grandparents Red and Kitty with her parents Eric and Donna for the Fourth of July holiday. The very shy and awkward Leia meets Gwen (Ashley Aufderheide), the outspoken neighbor next door and immediately forms a bond with her. Gwen later introduces Leia to her group of Point Place friends: her half- brother Nate (Maxwell Acee Donovan) and his girlfriend Nikki (Sam Morelos), Jay Kelso (Mace Coronel), YES a Kelso – Jackie and Michael’s son to be exact, and Ozzie (Reyn Doi).

Being a fan of That ‘70s Show, it took some adjustments getting used to the new cast that now takes up the space in the infamous Forman basement. It was easy to decipher which of the new characters were an amalgamation of the originals, and while there were many laughable moments throughout the 10 episodes, the chemistry amongst the ensemble cast didn’t rival That ‘70s Show. There were standout characters though.

Ozzie was hands down my favorite of the new characters. Ozzie provided many of the comedic moments with a natural deadpan charisma that illuminated the screen. Anytime he appeared in the episodes you knew he would steal the scene. Episode 5, “Step By Step,” centered on Ozzie coming out to Kitty and they were the duo I didn’t know I needed. Leia would be my second favorite character because she truly was a perfect blend of Eric and Donna. As a ‘90s kid myself, I didn’t get much ‘90s vibes from the show. There were a few mentions of shows that came out in the ‘90s like referencing DJ Jazzy Jeff from The Fresh Prince of Bel-Air and having a daydream sequence, which That ‘70s Show did often, centering Beverly Hills, 90210, but the show felt timeless in that it didn’t really transport me back to the ’90s.

Since That ‘90s Show takes place mid-decade, I think the series has room to grow if it gets renewed. The characters are likeable enough to want to see how their characters develop. If the legacy characters remain on board and appear more throughout the show, then Netflix could have another hit on their hands.

Getting Reacquainted with The Formans

Having Kurtwood Smith and Debra Jo Rupp back as Red and Kitty was one of the key reasons why That ‘90s Show worked so well for me. Hearing Kitty’s iconic laugh and Red’s first “dumb ass” brought so much excitement while binging the series and it was a quick binge since the episodes don’t run past 30 minutes. Kitty and Red’s chemistry remained untouched, and it was like watching old episodes of That ‘70s Show. Seeing them interact made me think about how The Formans don’t get enough love as an iconic TV married couple. Red and Kitty are like a dog and a cat getting married and they complement each other so well. Although That ‘90s Show is about the kids, Red and Kitty had plenty of screentime to keep fans of the original series interested.

Going into That ‘90s Show knowing the original cast would appear in some way made the anticipation for how they would very thrilling. The moment Eric appeared on screen in the pilot (Donna, Kelso, and Jackie also appeared in the pilot) I felt a beaming smile cross my face that didn’t let up until the episode concluded. It took a few more episodes for Fez, Leo, and Bob to reprise their characters, but when they did you could have sworn you were watching new episodes of That ‘70s Show. The actors flawlessly jumped back into their characters and delivered some of the best moments, although their appearances were limited. Keep in mind that this show doesn’t center around them, so it made sense for them to show up briefly, but I still would have wanted more.

All the callbacks like Fez’s “good day,” “Kelso’s “BURN,” Jackie yelling Michael’s name, Donna’s “what the hell,” Eric’s love for all things nerdy, and Bob’s “hey there, hi there, ho there” made their combined minimal screen time worth every second and reminded viewers why That ’70s Show is so cherished.

Out of all the legacy characters, Fez and Donna had the most recurring guest appearances with Fez dating Gwen and Nate’s mom Sherri (Andrea Anders) and Donna coming back to Point Place to check on Leia throughout the summer. It was a shame that the OGs didn’t get the opportunity to appear on screen together as a group, but hopefully if That ‘90s Show continues, we’ll get that proper ‘70s reunion.

That ‘90s Show is streaming on Netflix.