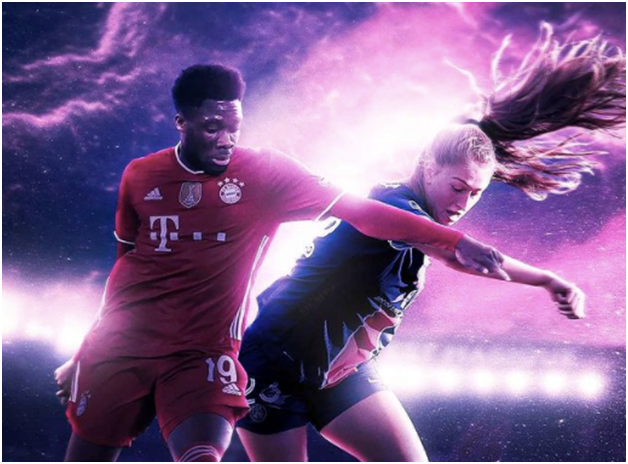 Image credit: mts.media/@Instagram
When people hear of soccer (or football depending where you are reading this from) power couples, they’ll immediately think of David Beckham and Posh Spice, or Megan Rapinoe and Sue Bird. But it’s rare to find a soccer couple that both play the sport for powerhouse clubs. That’s why the story of Jordyn Huitema and Alphonso Davies is worth mentioning.

Born in Chilliwack, British Columbia, Canada, Jordyn began playing soccer at the age of 6, and now plays for French club Paris St. Germain. In 22 appearances for the team, the forward has already netted 3 goals. She is also a member of the Canadian Women’s national soccer team and has represented the maple leaf 35 times, scoring 35 goals for her country.

It’s sad to say, but Alphonso Davies might be more well known outside of Canada than he is in his home country. Since soccer is a global sport, the harsh reality is that Alphonso has yet to become a household name compared to some of his hockey counterparts. At the age of 20, he’s already highly decorated. He played an integral role helping Bayern Munich win competitions such as the UEFA Champions League, the FIFA Club World Cup and more.

Their play on the field is incredible, but their presence on social media is almost equally as entertaining. The two originally met as both were players for the Vancouver Whitecaps academy, but now they often have to spend time apart because of their jobs as professional soccer players. When they are together though, they do a good job of delivering to their fans by uploading fun content for people to tune in to. Their YouTube Channel Jordyn & Alphonso already has over 700, 000 subscribers with millions of views on almost each video. They provide viewers with a glimpse inside their lives by doing fun challenges, competitions and vlogs.

Although they don’t have a shared TikTok account, they still post content with each other on their own accounts. There is no denying that these two have the attention of younger audiences because Jordyn has over 600, 000 followers on TikTok, while Alphonso has a whopping 3.7 million. They take the term “relationship goals” to a whole new level.

It’s incredible to see how popular these two athletes have become after both coming from similar humble beginnings with the Vancouver Whitecaps academy. Only several years into their professional careers, their potential to grow the sport in Canada and globally for newer generations shouldn’t go unnoticed.