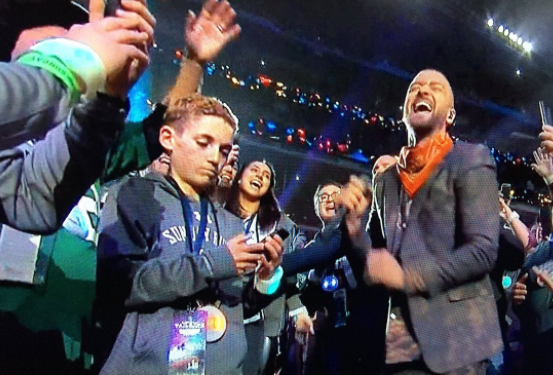 During Justin Timberlake’s halftime show performance at last night’s Super Bowl, he joined spectators in the stands and danced along with a teen boy in the audience, followed by taking a selfie with him. But soon after the selfie, the boy, now known as “Super Bowl Selfie Kid”, began typing on his phone and looking a little uncomfortable – but who would blame him.

Nonetheless, the internet produced some pretty hilarious reactions and memes:

This kid is tweeting.. "Where is NSYNC?" #JustinTimberlake #SuperBowl #PepsiHalftime pic.twitter.com/Oxmcilz1Fy

When your friend go dancing with strangers at the club and u just don’t know what to do #selfiekid pic.twitter.com/MzH4237Z1y

I want to be this kid when he goes back to middle school tomorrow #SuperBowl pic.twitter.com/oSWE33AuYJ

When you Chilling with #JustinTimberlake but your mom texts you that it's Bedtime #selfiekid pic.twitter.com/ZFev5AunUe

This kid is tweeting "They should have brought back Janet Jackson" right in front of #JustinTimberlake #Superbowl pic.twitter.com/NV28Qp5ckP