Home / Sports / Video Interview: David Ayres talks about coming in as an Emergency Goalie for the Carolina Hurricanes 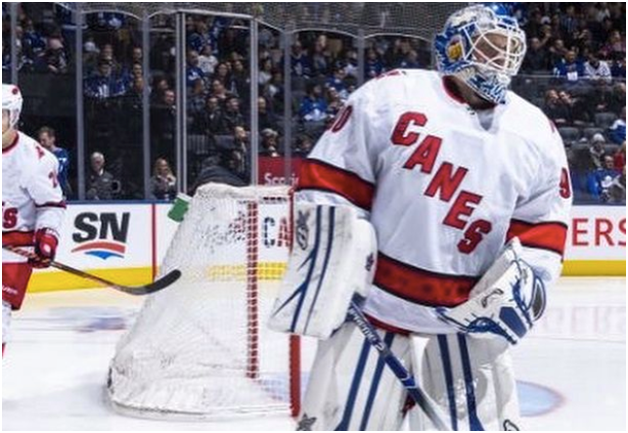 Image credit: davidayres/@Instagram
On February 22, 2020, David Ayres suited up for the Carolina Hurricanes as an emergency backup goalie and helped them beat the Toronto Maple Leafs. It felt like something you would see in a Disney movie. It’s funny how the universe works, because Disney and James Corden are now working together to tell this real life fairytale.

David Ayres on Being An Emergency Goalie

After receiving a kidney transplant, David Ayres was unsure whether he would even be able to play hockey again. Before he was an emergency backup goalie at the NHL level, David spent some time as an emergency backup for the Toronto Marlies. One day while working at the rink, he noticed some Marlies players shooting on an empty net. The next day he brought his goalie gear to work and that’s how it all started.

The thought of playing in the NHL never even crossed his mind. He was just happy to being taking shots against skilled professionals in the AHL, “it’s better than paying $600 to play in a beer league with guys who can’t shoot,” Ayres laughed. Another positive that has come out of this experience is the opportunity he now has to use his platform to raise awareness for organ donations. On top of the already feel-good story, at the time people weren’t fully aware of Dave’s journey, he said “they had no idea about my medical history when it came to the transplant.”

Hockey fans were ecstatic when they learned that David Ayres’ story was going to be made into a movie. In his interview with Popternative, David shared how the idea came to fruition, “I got a phone call from James Corden and he just called to congratulate me.” During that phone call, James Corden also mentioned to David that he owns a production company, but there are many entities that he wanted to bring David’s story to the big screen, “we went through the process of listening to I think 24 different pitches.” Coincidentally, James Corden’s neighbour works for Disney, and in the end, David and his wife Sarah decided to move forward with James. Due to the pandemic, there’s still a lot of uncertainty surrounding the project, but David hopes people remain patient, “something is going to happen and we’re going to have fun with it.”

Over a year has gone by since that memorable night, and now David is trying to return to his regular life. Every now and then David still gets requests from media to share his story. The most rewarding part of for him has been hearing from all the people who have reached out to him that say they are inspired by his determination.