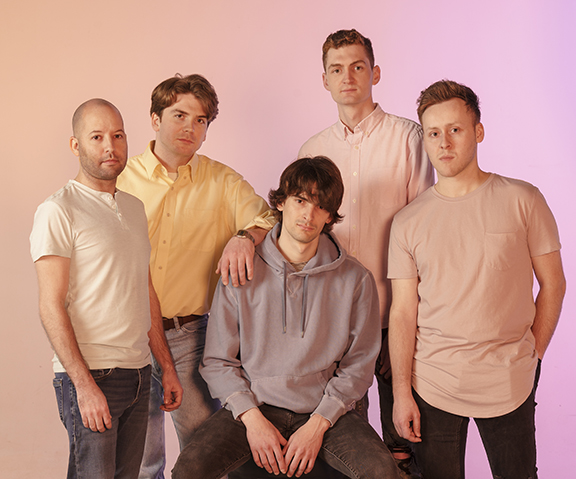 We chatted with Guitarist Jarred Kenny from the Canadian rock band Heather about their new music video and single for “Sucker Punch” which is out now.

What can you tell us about your new music video?

Our debut single “Sucker Punch” takes you on that all too familiar walk through the doors of the nightclub or bar where you first see her after you’ve been sleeping all day, and is about the overwhelming and complete infatuation with someone you’ve just met who most likely has no interest in you. We had the great pleasure of working with acclaimed Canadian producer Gavin Brown (Three Days Grace, Billy Talent, Barenaked Ladies, Mother Mother) on this track. Working with Gavin on our first single release was a surreal experience to say the least, especially since albums like Billy Talent I & II and Three Days Grace self-titled album (to name only a few)have been staples of ours since our youth. With Gavin’s help we took out our paring knives to craft it into the slinky and sexy rock tune that it is today

When I (Jarred Kenny, Guitarist)  hear a song I love it doesn’t just pique my interest, it gets me out of my seat and finds its way deep into my very being. There are songs that when I’ve heard them on the radio I’ve just had to pull my car over and take them in. This is the feeling I strive to provide to others when we are writing. I want every listener to look at their friends during one of our songs and say “Did you f***ing hear that?”, like I have so many times.

Between the five of us we channel a slew of influences, all coming together to create something greater than the sum of its parts. Modern rock without synthetic additives; we produce the cleanest of fuels for today’s rock loving humanoid.

We’ve grown up absorbing everything the Canadian rock scene has had to offer and have most notably been influenced by the countless trips we’ve taken to follow the likes of The Trews, Big Wreck, and Monster Truck. We have a deep love for grooves like those of Audioslave, and an ongoing love-affair with the melodic and funk driven sounds of The Main Squeeze.

For me (Jarred Kenny, Guitarist) it was when I played my first real show. I started my first band in Jr. High and we eventually started playing this all ages venue in a church basement which was actually pretty popular. I was so stricken by nerves and even though it felt like our entire set flew by in an instant, I fell in love with playing live music that day.

Go out to shows, and If you loved the show tell the band. Support the musicians around you and you’ll receive support back. Make connections with the like-minded artists around you, play every show you can get, and opportunities will follow.

I’ve (Jarred Kenny, Guitarist) always had a blast playing Sucker Punch live, but even more so since we’ve released it as a single. Last time we played this live the crowd hurt MY eardrums and I was certain the floor of the bar was going to give out!

This is a cover we just can’t stop playing. It is a non-stop flat-out good time on the fretboard for me (Jarred Kenny, Guitarist) and the crowd absolutely loves the gang vocal driven chorus.