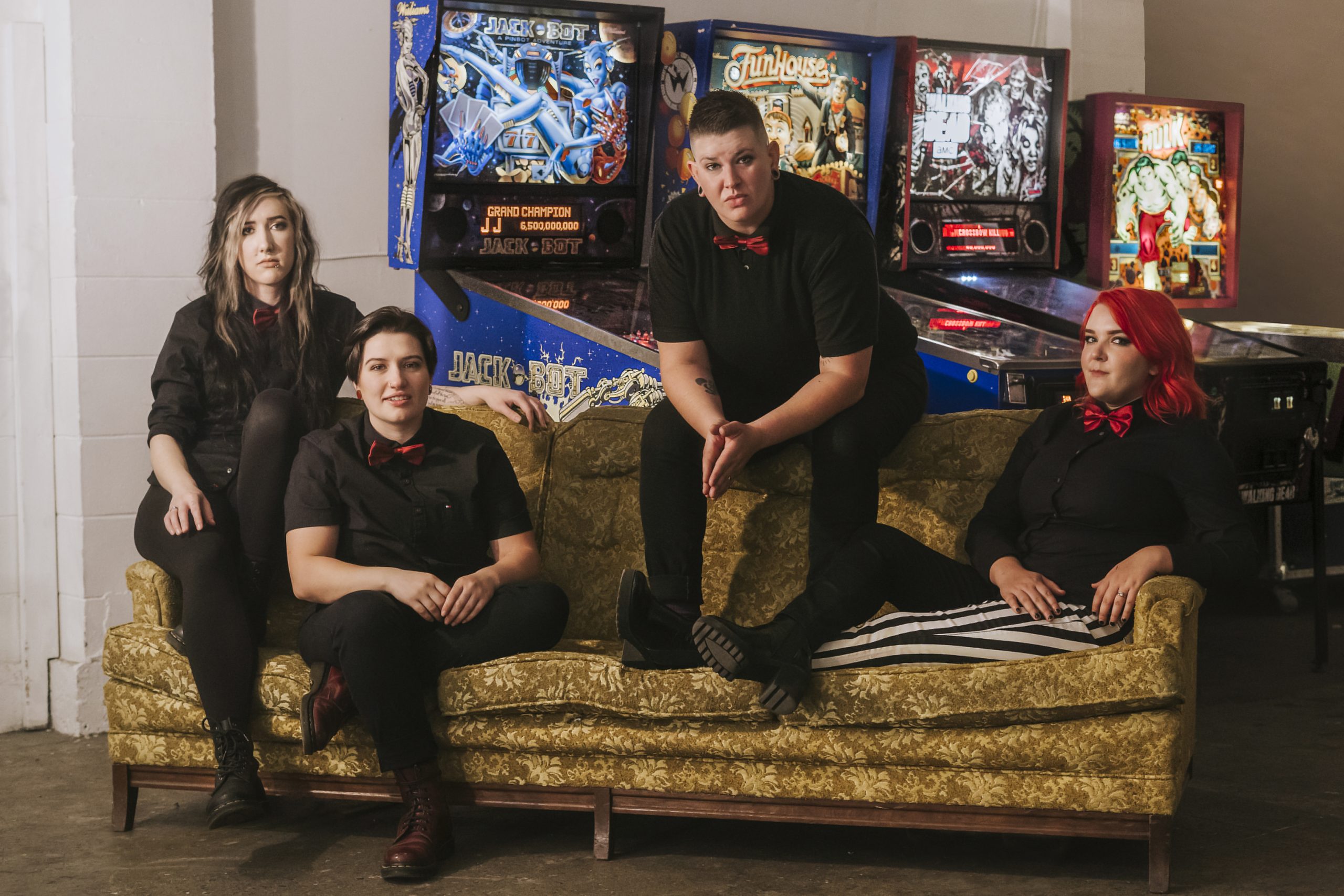 Image credit: Kailyn Roth
We recently spoke with Nicolle Bell-Dupas who is the lead vocalist and guitarist of the band Strange Breed – a 4 piece, all queer, all-female alternative rock band based out of Vancouver, Canada. The band also consists of Terra Chaplin (Lead Guitar), Megan Bell-Dupas (Drums) and Jess Dubois (Bass). They recently dropped a new single, “So Blind” available on all streaming platforms.

Nicolle tells us about the sound of Strange Breed, some of their music influences, creative process and lots more. Check out our conversation below.

When people listen to Strange Beed, what are you hoping they get out of it?

Nicolle Bell-Dupas (NBD): Of course everyone will experience our music differently, and connect with it differently – as it should be. But I think overall, we want people to go “oh… that reminds me of something that I love, but I can’t put my finger on it”. We pull from a mix of nostalgic influences in our lives, spanning from 90’s punk/riot grrrl, to early 00’s pop punk and femme rock, to “classic rock”. I personally want our music to be familiar and comfortable to our listeners, but also not exactly like anything else that they’re listening to.

And beyond the sonic side of it, I’d say that we want our listeners to feel seen, and to see themselves reflected somewhere in our stories – no matter who they are or how they identify. There is nothing like hearing a song and going “this is exactly how I feel right now”, or “this is something i’ve experienced in the world that no one else in my life understands”. The point is that we want to remind folks that they aren’t alone. Also – we just want people to have a blast listening to our tunes. Some of them are empowerment songs, and some are just fun rock songs meant to set the tone for a killer road trip with your best friends.

Who would you say are some of the band’s musical influences?

NBD: We are all SO different with major influences. We all love a lot of the same music, 100%, and crossover on a few of the same key favourite artists like Bikini Kill, Veruca Salt, Garbage, The Distillers, The Pretty Reckless – those sort of vibes. But then we all each individually have a pretty wide array of favourites. For me personally, some of my top faves are Metric, July Talk, Sleater-Kinney, Paramore, Veruca Salt, Courtney Barnett. Jess is the biggest classic rock fan, she loves Led Zeppelin, Ramones, Motley Crue, T-Rex, artists like that. Megan is a huge fan of Tool, but then also is probably the biggest Norah Jones fan I’ve ever met. She also loves indie pop. Terra is probably the biggest punk and metal fan; The Distillers is definitely her favourite band, but she also grew up obsessing over The Cranberries. So yeah – we’re all over the place!

NBD: I obviously can’t really speak for the others on this, but for me? Yes. It’s never been an option for me. I tried to fight it a bit in my late teens/early twenties, taking a more conventional approach to life…Definitely scared of the inevitable rejections and hardships that would lie ahead in life if I pursued music. But eventually, I met the right people and it just worked out. Not that it’s not reallyyyyyy hard sometimes – especially in the middle of a pandemic! But honestly, I wouldn’t want to do anything else. The entire band has set up our lives and day jobs so that we can prioritize the band as much as possible, and have the flexibility to tour, and put money and time into this project. Strange Breed is my baby, and I guard it with my life. She’s a toddler now – going on 5 years! Couldn’t be more proud of what we’ve managed to accomplish.

NBD: The rest of the band will laugh when they read this because I am always a little bit “too realistic” when I answer this question, but I think someone has to be instead of just saying “chase your dreams”. I promise, I want you to chase your dreams. Life is too short and too fragile to not chase your dreams, I promise you that. But do not fool yourself into thinking that this is easy just because you love it. It is one of the hardest things I have done in my life (most musicians would agree, I think) and we’re only just beginning.

People won’t necessarily find you just because your music is good. Utilize all the avenues available to you online, and learn to wear a lot of hats right out the gate: that will include band manager, booking agent, publicist, distributor, label, merchandiser, etc etc. But be relentless, and persistent – with creating, with writing, with performing, and with pursuing the people you want to work with. When things align and work out the way they are meant to, there is nothing more precious! That feeling of “I made this happen, and people relate to what I am creating” is irreplaceable. So in short: yeah, chase your dreams. Take (calculated) risks. Do not quit your day job…at least not right away. Be persistent, and don’t be afraid of the hard times, or the many many times you will be rejected. You’re not the only one experiencing this!

What is your favourite Strange Breed song to perform live?

NBD: Right now, mine personally is our song “Tigers” – and no, not just because it’s the most recent single we released! That is a very personal song to me, about a long, childhood friendship that I had in my life that ended in my early twenties. It’s a very cathartic song for me to play, even just at band practice. One of my favourites lyrically, and sonically!

NBD: A lot of the time, new song ideas – either lyrics or melody, but sometimes both simultaneously – come to me when I am nowhere near my guitar or in the “mood” to write. I think ever since I was young I’ve just processed my thoughts and emotions via singing things to myself – often for fun/as a joke (stuck in traffic?? Try singing about it!!!!), but also sometimes very seriously. So I get ideas when I’m driving, walking the dog, cleaning the house, typically. In short, the process is feel something –> Remove the “filter” of worrying what others might think –> Free write until the words and melody feel aligned –> Usually, write a verse and a chorus, or something similar –> Bring the piece/idea into practice to finish with the rest of the band.

Sometimes, we also start songs completely from scratch from a jam session together as well, and write the whole thing as a team: “Reputation” is one such example.