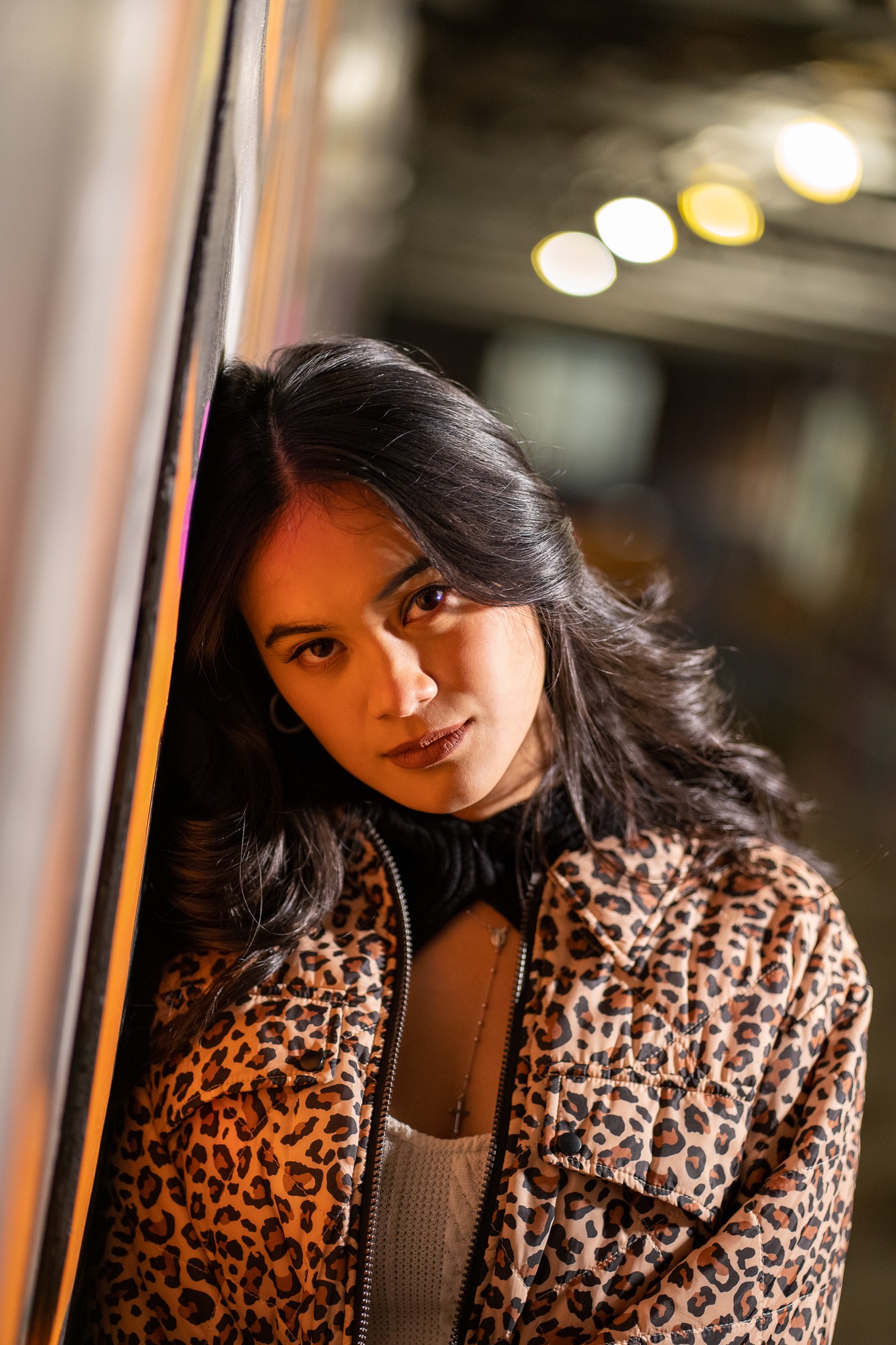 We recently spoke with Toronto-based singer-songwriter and actor Martina Ortiz Luis about some of her new projects and music. Her latest single “These Days” is out now on all streaming platforms. Martina is also the official anthem singer for the Toronto Maple Leafs in the National Hockey League. We asked Martina about how she got into storytelling, her new music, singing for the Maple Leafs, and upcoming projects. Check out our in depth conversation below!

Martina Ortiz Luis (MOL): As a kid, I always loved performing. I would sing and reenact scenes from shows like The Little Mermaid, Mulan, Annie, Barney, etc for my family. My parents saw how much I loved performing. They realized I could actually carry a tune and memorize words very quickly at the age of 3 so they put me in private singing lessons, and by 4, I was competing and performing all over the Greater Toronto Area. Acting came a bit later. I think I come from a family that has always been passionate about the arts, though no one in our immediate family has pursued it as a career. Both sides of my family are hardcore music lovers. Our houses are never quiet, music is always playing in the background, and at parties there’s always some 80s song playing while the elders dance the cha-cha or whatnot.

My dad’s side is especially enthusiastic about movies. I remember so many Sundays where my family and my cousins’ family would go to the movies immediately after church. More recently, we’d go to the movies on Christmas Day. My aunt attended the New York Film Academy for some time in her youth and harps on me ’til this day because I haven’t watched “Call Me By Your Name” yet (I know! I’m sorry!!!). I think the passion for storytelling kind of just became ingrained in me. Singing was my first love, but I realized I also wanted to try acting when I was about 11 or 12, so my parents put me in classes at Armstrong Acting Studios. The rest is history.

Did you always know you wanted to sing and act? Or did it kind of just happen?

MOL: I think I’ve always known I wanted to be a performer. I’ve always wanted to just entertain and connect with people.  Whether that be through singing OR acting. I truly love both and I really don’t see myself doing anything else. I’ve been in love with performing ever since I was a kid. And I don’t think anything really “just happened”. Though I enjoy what I do so much and though it is tons of fun, a lot of hard work has been put in to get to where I am. I’ve probably sung for hundreds if not thousands of events in my little lifetime, and I’ve auditioned for a countless number of roles since I was 15 years old, getting rejected by hundreds. I still have such a long way to go. Being in this industry is not easy, but I wouldn’t change the path I’ve chosen to go down.

What can you tell us about your new single that just came out?

MOL: My new single “These Days” is available now on all streaming platforms! Whether you choose to listen to Spotify, Apple Music, Tidal, Deezer, Amazon Music, etc, you can find my song there! I started writing “These Days” back in June 2021, just before I turned 20 in the heart of Ontario’s second lockdown. At a time where it felt like nothing was changing, nothing was moving forward, there was no end in sight, and there was hardly anything to do but to watch the news and worry. And though I know I’m young, as I reached the final days of my teenage years, being stuck, isolated at home, I couldn’t help but feel the pressing weight of time going by. I hit a slump, where I couldn’t book a show for a whole year, the live performances/gigs/conventions kept being pushed back to 2022. It brought me to a bit of a dark place. Literally, in my room, alone, in the dark, writing in my notes app about how I was feeling “these days”. That was where the lyrics for the verses first came to be.

Then, stepping into the songwriting session with Adaline, (an amazing artist whose songs have been featured in tv shows like Grey’s Anatomy, 90210, and Wynonna Earp) and having written a lot of these lyrics down, we both started admitting our nervousness with meeting each other since neither of us had really gone out socializing with others beforehand and it had been quite some time since artists could even be allowed to work in the same space together. And as we both began describing the burnout we had both been feeling, we realized that this experience still brought us a sense of togetherness and community despite having been physically isolated (“tell me all the ways you’ve lost your mind, ’cause all those voices sound a lot like mine”). So if this little blurb speaks to you, please go give it a stream/download/like. And I’ve got another single on the way. January 7, 2022! Mark your calendars!

How did the opportunity come to perform the national anthem at Toronto Maple Leafs games?

MOL: Back in the summer of 2016, before going into the NHL’s Centennial season, the Leafs announced that they would be holding auditions to have one permanent anthem singer for their 100th season. They promoted on socials and on tv, and a family friend who came across it suggested I try out. So in August 2016, when I had just turned 15, I went over to the Air Canada Centre (now called Scotiabank Arena), at 7:30am, to get into the already growing line for the auditions that were opening up at 8am. I was a little intimidated at first because I saw all these older singers that knew each other being on anthem rotations for the Raptors, Jays, Marlies, and whatnot. I had to do multiple rounds of singing the Canadian (English and bilingual versions) and American anthems throughout the day. At 4pm they told me I could go home and they’d give me a call. A couple of weeks later I got the call and here I am, nearly 6 seasons in with the Leafs organization.

MOL: Grand Army was the very first tv series set I’d ever stepped foot on. I was only in one episode but the scene we filmed had so many moving parts and took us maybe 12 or more hours to shoot. We were filming in an abandoned high school with hardly any AC. It was in the middle of the summer but we were dressed in fall outfits like big sweaters and such, so it was HOT. It was a pretty crazy day for me because I didn’t really know what to expect or what to do really, but to be surrounded by so many other actors my age (if not a bit older) and to finally get a little glimpse into the moving parts behind a Netflix production was pretty cool. Working on Wynonna Earp, was just life-altering. Booking the role as Rachel Valdez was my first major acting gig. I had been auditioning for tv/film forever, mainly only booking singing gigs, then finally – and very suddenly – I booked this recurring role where I was going to be appearing in 11 episodes. It was such a new and exciting experience. There were just so many new things I had to learn, discover, and navigate in the months that we had filmed, which was a bit intimidating at first. Some of these include flying back and forth from Toronto to Calgary, doing stunts for the first time, learning to hold a gun, a crossbow, being the youngest on set, going on hiatus due to the pandemic, then being the first North American production to recommence filming in the middle of the pandemic, etc.

Thankfully, I had these great mentors on set, so many veteran, well-respected, Canadian artists that I got to learn plenty from. Melanie, Kat, Dom, Tim, Varun, Greg, they were all just so amazing and welcoming. All in all, I’m just super grateful that our showrunner, the wonderfully bold Emily Andras, entrusted a newbie like me to take on Rachel’s character. And the fans! The Earpers have been so kind and amazing. They got our show a People’s Choice Award not once but twice! They’re so passionate about this show and they’ve very much created a welcoming and inclusive space amongst themselves. They welcomed me into this weird little family with open arms. I’ve gotten so many touching messages from all over the world. And thanks to this show and this incredible band of Earpers, I get to travel around the world next year, convention hopping, meeting them in person!

What can you tell us about Topline on CBC?

MOL: Topline is a new musical series that I am so grateful to have been a part of. Our cast and crew was made of so many talented, creative, and kind people led by the incredible Romeo Candido, our showrunner and director. Because this was a brand new series with so many young actors and some first-time actors, Romeo was just such a great mentor, giving us the freedom to just try new things and play. He also saw something in me that I hadn’t even truly realized before, which to my surprise was an interest in directing. He let me shadow direct for a day and even let me direct part of a scene, so overall it was such an educational experience. It should be coming out sometime in 2022 so watch out for it on CBC Gem!

Listen to “These Days” by Martina Ortiz Luis here