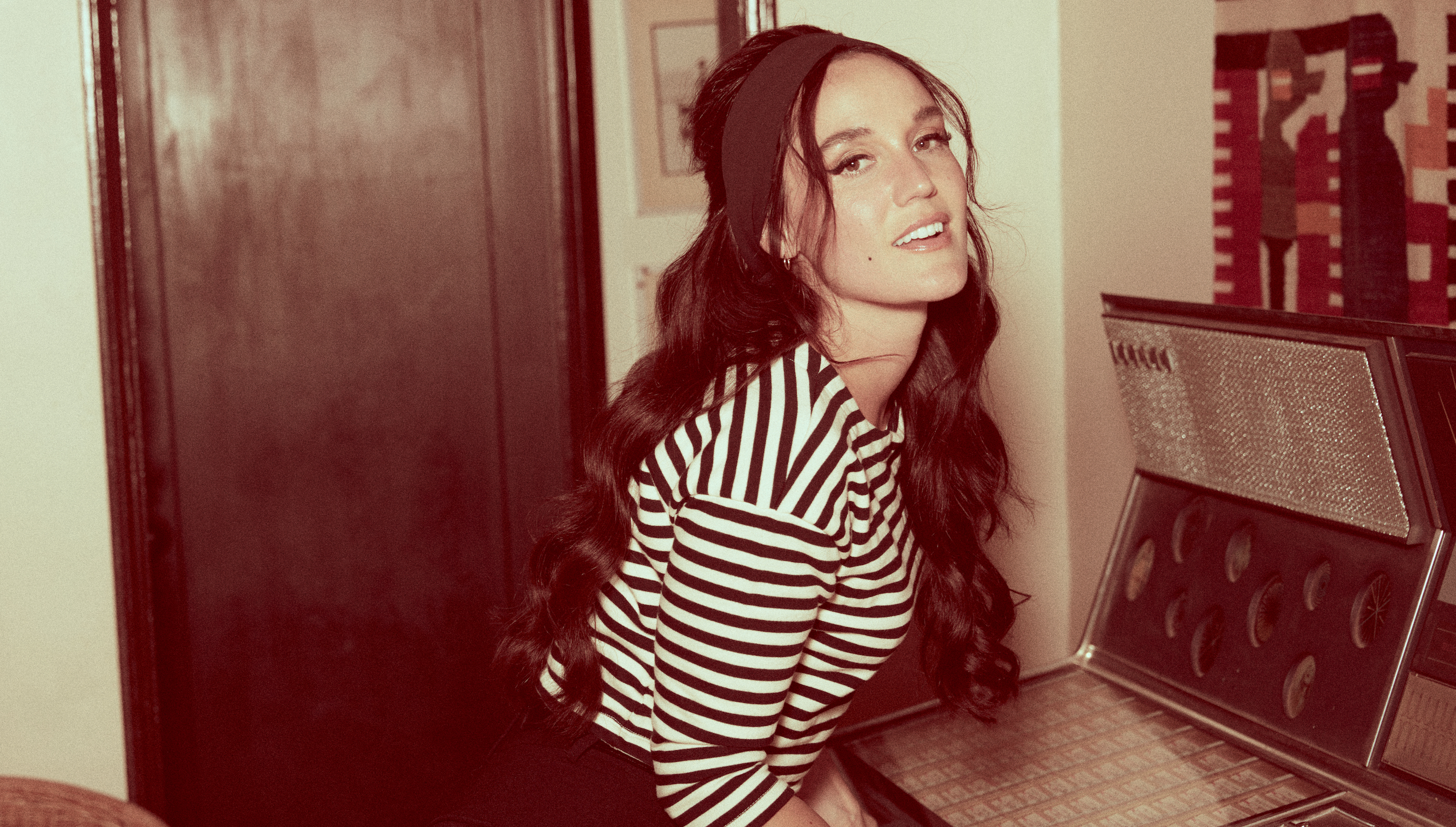 We recently spoke with Canadian Bilboard approved artist Hayley Sales who released a music video for her new raw and soulful indie pop song,  “Lifeguard.” The singer-songwriter discusses how it feels to be releasing new music, when she knew music was something she wanted to pursue, her musical influences, advice she’s received, and tons more. Check it out below!

HS: Before I could talk, I’d apparently raise a finger and if my older brothers and parents didn’t simultaneously break into song, I would throw a tantrum that could scare a tempest. I spent my days sitting on the mixing board in my dad’s recording studio or running around the yard escaping witches and swooning over princes, swept away by my romantic imagination.  I was such an emotional little creature, I had to sing. I don’t know, it’s funny. I just needed to be singing. Once I realized I could sing and get people to watch, my mind was blown. I’d make my family sit in the living room for hours while I belted out whatever my little heart wanted. Yes, I was a fiery handful and owe a lot to my family for being so patient and supportive.

My first official performance was a talent show when I was five. I remember it so clearly…the smell of the old curtains hanging in the theatre, the creaking chairs. I was clinging to the back of my mom’s shirt, hiding behind her. Then they called my name. It was my turn. I walked on stage, the heat of the lights hit my cheeks, and began to sing Dreams to Dream (Linda Ronstadt). I was home. The stage was home. I fell head over heels in love with performing…like I’d always been meant to be there. It’s funny to say, but I feel more comfortable on a stage than anywhere else in the world.  Not because I’m escaping myself or my world, but more because singing and performing is the language that’s easiest for my heart to speak. From that moment on, I had to perform. That fire has kept me going when everything else fell apart. I just love it. That moment when you look out into the audience and see the stage lights reflecting off the eyes of the people there with me, that’s kept me going. I close my eyes and remember that feeling when everything else is falling apart. I’ll never give that up that love, no matter how hard things get. It’s worth it.

And now to be releasing music…after years of being prohibited from doing the thing I love most…I am more excited and inspired than I can even begin to describe.

When people listen to your music, what are you hoping they get out of  it?

HS: Everything that I feel, everything that I think, every way that I love, every moment I’ve hurt…I guess you could say my music is an ode to romance. Unabashed romance…Romance has always been an extremely important and inspirational part of who I am and how I express myself. And not just that fall in love type of romance, but romance as a way of life, a way of experiencing the entire spectrum of feelings.

HS: As far as inspirations…it might sound strange, but I somehow managed to grow up in the 1940s. Clearly, I didn’t really, but in many ways I had no idea modern music or life existed until middle school. While other kids were watching The Simpsons, I was watching I Love Lucy or Roman Holiday. When I was five years old, I’d heard a recording of Judy Garland and a fuse inside of me ignited. My passion for that era exploded. I dug in with every facet of my mind, soul and heart. I let the unabashed romantic melodies of that era saturate my every second. I spent every second of the day rehearsing for theatrical productions, musicals, Shakespeare, practicing Gershwin, writing songs, daydreaming about marrying Gene Kelly…only to find out he was a bit too old for me. In many, many ways I didn’t fit in. I was an outsider, a misfit for the era. And for a while, I didn’t mind. But then I started to care. I tore down all the classic film posters off my walls and hid the entire library of musical films I’d collected…I tried to be what I considered ‘normal,’ quickly developing a tendency to only feel loved through my talents. Not that that was true, but I was so insecure…I dug into my career very intently at a very young age.

At some point around the age of sixteen, I moved to LA. A record company exec told me my style of music was irrelevant. That I was too dark, to emotive, too different. That I needed to find an angle if I wanted to be successful. I was shattered and impressionable and incredibly ambitious. I put that entire side of myself, all those heart infused tunes, into the closet and conjured up an entirely different version of myself. I found a good deal of success with the lighter, less dramatic tunes I released with Universal Music and wouldn’t change a thing. However, in the past handful of years, after a searing set of heartbreaks of failures, I’ve come to realize how unfortunate that advise had been. I’ve now made a promise to myself. Starting with this new record, I would become transparent. I would only sing the songs my heart needed to sing. Only write the music I wanted to hear. I’d be the messy romantic that I am…I’d let myself be as intense and dramatic or as happy and elated as I wanted without a filter. It’s incredibly challenging. I’m so riddled with insecurities. I don’t think I’ll ever think I’m good enough, but in many ways, this album kept me going.

HS: Always. I’ve known since I was a baby. It’s been my one true flame since forever. Music is my soulmate. I can’t imagine a life without it and hope I never have to.

HS: It’s not going to be easy. There are going to be many reasons to give up. There are going to be hundreds of doors that slam in your face. And sometimes the rejection is going to get so thick, all that you can see plastered on your horizon is a big clump of failure and heartbreak. At times, the doors will slam so loudly you can’t hear the voice inside anymore and you might even question why. I know I did. I know somedays I still do. But I genuinely hope you hear me when I say this: If you truly need to write, if you truly need to sing, if you TRULY need art to survive, let me be that person yelling out over all that rejection telling you to keep going. Don’t turn around. It might not happen overnight and that’s okay. In some ways, now that I’m starting to climb my way out of the dark, murky little dwelling I’ve been wading in for years, I’m more grateful for the loss and rejection than the successes. It forced me to develop grit.

When I lost ‘The Misadventures,” the record I’d spent five years producing, the heartbreak shattered me.  I spent months crumbled up in a shell of myself. The betrayal, the unfairness, the loss, was so shattering, I almost couldn’t believe the pain. It was one, maybe two voices that got me back on my feet, that convinced me to not give up. And if there is any way I can be one of those voices for you, telling you to be resilient, to dig in and keep going, then I feel as though my entire experience was worth it. So, dig deep. Find whatever it is inside you that’s just aching to get out. There is no way you will fail. The art is worth it. People might not get it at once, and that’s okay. If you’re creating the music you need to hear, there will be many others who need to hear it too. Just focus on the art. Keep your head down and keep going. If you work hard enough and are in it for the right reasons, your time is coming. And lastly, stay grateful. Stay grateful for everyone and every little thing that comes your way. Support is precious. Friendship is irreplaceable. And most important, stay in love with your art.

HS: You know, it really changes night by night depending on what I’m going through. Having said that, I just finished touring the UK with Rufus Wainwright (still pinching myself) and was surprised by the song that took me furthest out of my own mind and into the story I was telling. It’s a newer song called WORLD CAN WAIT.  I wrote the tune last year during the pandemic when everything was falling apart. In many ways I wrote it to remind myself that, even though so much had gone wrong, so many doors had slammed shut, so many mistakes were made along the way, and so much had not happened I wished had, there was still so much to be grateful for. Being loved…being alive…being able to sing, even if just for the houseplants. When I looked out at the audience at The London Palladium, I started to cry singing the tune. I realized just how overwhelmed with joy I was to be singing for everyone in that room. The song became a love song to my audience.

HS: I often joke I can’t write a song. It writes itself. I just get out of the way. If I try to write a song, it inevitably sucks. And the muse doesn’t tend to strike when I expect it.  But when it does, it’s almost like stepping out of time. It usually happens at night when I’m alone. I’ll be sitting at the upright piano in my bedroom. A melody will pop into my head. I follow the notes to see where they go. I find the chords that feel the way the melody feels. And then I dive into the soundscape, trying to translate what the whole thing is trying to say into words. Other times, I’ll be on the highway driving, feeling, and suddenly a lyric appears in my mind. I’ll pull over and write it down as quickly as possible before it runs off into the land of lost sonnets and unsent love letters.

HS: “If you build it, they will come…” I know that might sound like it isn’t about music, and you’d be right. But when my mom told me that as a kid, I knew what she meant. If you believe it, if you dream it, if you can touch it, if you can feel the joy of it before it is a reality…if you can touch it, see it…if you love it more than any of the obstacles that will fall in your path, it will become a reality. Maybe not on your timeline or how you think it will. But it will. I guess it’s more than just about music for me. It’s a way of living life. A way of manifesting the life you want and not getting discouraged when it doesn’t happen right away.