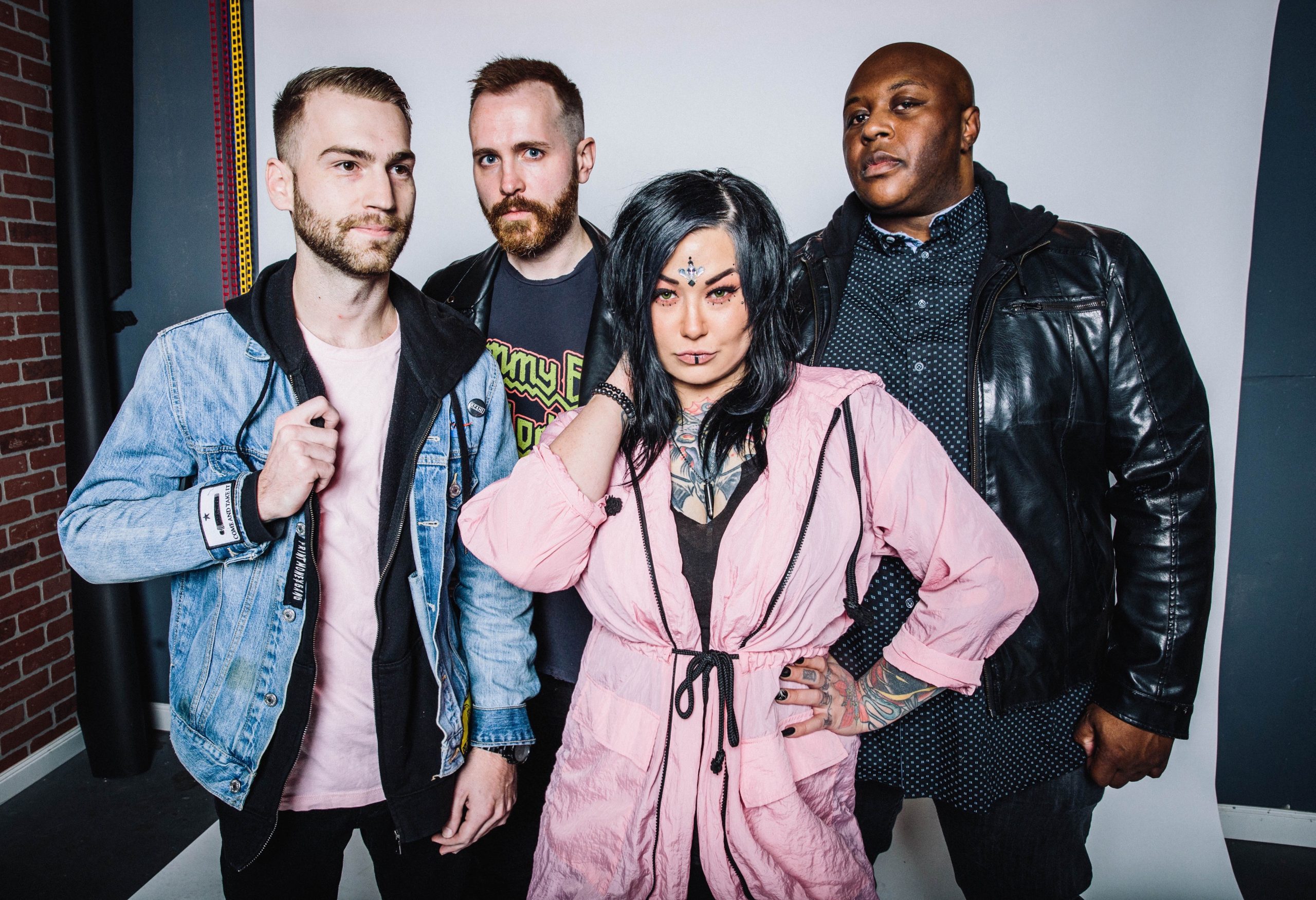 We had a chance to chat with Mike and Enoma from the alternative pop band Haunter about their brand new track “Illuminate” which is out now. You can listen to their new song below.

In a Nutshell, what is Haunter all about, and how did it start?

Mike: To me, Haunter is about hope and renewal. It all started from a crazy idea that Enoma had to start a pop project with a bunch of people who had literally never done anything like it before. We all came out of emo / rock / metal bands and even our producer/co-writer Tyler had worked on mostly heavy stuff before. But we all wanted to try something new, so we sat down in the studio having literally never played a single note together and just created from scratch and it was magic from the first moment. I feel like it allowed all of us to almost start fresh in the music world despite having been in touring bands, etc. for the better part of a decade. And that new spark / fresh start flows over into most of our songs.

There are a lot of sounds happening when people listen to Haunter; you can’t put it into one genre. Do you think that was intentional?

Mike: I think a lot of that comes from our diverse backgrounds in the music industry. But it was definitely an intentional decision. From the moment we sat down to work on our first song, we made it a point to go into the entire process with no specific expectations or goals other than to just make the best song we could and just follow where the music took us. And we’ve kept that mentality every time we’ve written a new song since then. It doesn’t matter what we’ve done before, if an idea sparks that we’re all excited about, we follow it to the end, regardless of where that road takes us.

Enoma: So for me, it was very intentional for us to sort of genre hop with Haunter. I’ve always wanted us to be a group that you couldn’t really place firmly anywhere. That sort of ambiguity gives us all this room to not be defined by anything or anyone. What makes it cool is that Lucy is such an amazing vocalist that we can sort do whatever we want music wise and she will deliver a stellar performance.

Talk a little about this new single

Mike: “Illuminate” — like many of our songs — is about hope. It’s about not giving up on your dreams or your love, working your ass off and taking over the world without letting anyone or anything stop you. I feel like that’s something that everyone can relate to, but I feel like it especially carries extra weight after the rough year that was 2020 for everyone. I know the world isn’t exactly back to normal, but soon we’ll be able to pick ourselves up, dust ourselves off and get back to work so we can be stronger than before.

Enoma: “Illuminate” to me is really a love song. There’s definitely hopeful elements, which are a reoccurring theme in a lot of our songs, but it really about the dynamic you have with a partner. Sort of the inspiration behind the song were some of the experiences that Lucy and I had with people we were seeing at the time. Just those quiet moments when you look over at someone and you realize that you’re totally crazy about them. There’s a lot of beauty in those moments and we wanted to try our hand at capturing it.

Talk a little bit about the changes Haunter had to go through during the pandemic (No Shows, Live streams?) Was it productive writing-wise?

Mike: The pandemic literally couldn’t have come at a weirder time for Haunter in my opinion. As I mentioned before, we sat down in the studio on day one having never even played a note together, so Haunter was born in the studio. And we spent the better part of two years writing and recording before we ever really launched the project. But when we finally launched our first single in February 2020, we had no idea that the world was about to shut down. In a way, it did really help the song-writing process, as when we were in L.A. writing this summer we literally couldn’t do anything EXCEPT work on the songs. And I feel like that extra time and dedication to the music allowed us to take a huge step forward as a band. Now if the pandemic would just hurry up and end so we can finally play our debut show that was supposed to be last year.

Enoma: I think it’s been an interesting time for creators. We have an opportunity to help people find ways to pass the time or find something new to connect with. I’m not downplaying how this has straight up ruined people’s lives at all. What I found inspiring is how people created in spite of all this tragedy. I love the idea that Haunter came out during this time to hopefully be that outlet for someone. Would love to do live shows of course but I think I love being able to focus on creating content and engaging with people as often as we can now. It’s helped us build a community of listeners. Production wise we have been so very fortunate to be able to do what we needed to in order to write/record with Tyler. We’re so lucky to do what we do.

Who are some of your influences, artist wise?

Mike: As a band, our influences are all over the place. Everything from country to classic rock to metal to pop-punk to EDM to K-pop and everything in between. But I think that diversity allows all of us to bring cool ideas from other genres and work them into pop songs, you know? I feel like we draw as much from Taylor Swift or Coldplay or Jimmy Eat World or The Maine as do from pop/synth-based/EDM artists like Dua Lipa or Chvrches or Seven Lions. The beautiful thing about Haunter is that no idea is too bold or too crazy when we’re writing. We’ll try anything and everything until we all feel like the song winds up exactly where it was supposed to.

Enoma: Mike pretty much nailed all the references hahaha. I think that’s made our writing sessions really interesting because there are no boundaries outside of what we think sounds dope. If it meets that criteria then it stays. Though for me, my influences definitely land firmly between pop and rock. My favorite band of all time is Jimmy Eat World. Without a doubt. Outside of that I am a sucker for pop music. Some of my favorites are Chvrches, Cheat Codes, Loote, Halsey, and this new artist Charlotte Sands. Pop is such a broad sort of spectrum but it’s all about the melody and the vibe.

What are you hoping people get when they listen to Haunter?

Mike: Hope. Love. Passion. Inspiration. Pretty much any positive emotion you want to list, haha. Our songs touch on a lot of things in life, but they all generally come back to one central message: don’t let anyone tell you who or what you’re supposed to be, and don’t let anyone or anything stop you from becoming the person you want to become.

Enoma: I’m hoping that they realize that they’re not as alone. Growing up and even well into my adult life I felt like an outsider. I never really fit in anywhere. Music did a lot to make me feel comfortable in my own skin and I sincerely hope that our music can do that for someone. Give them the space that they need to live and find joy.