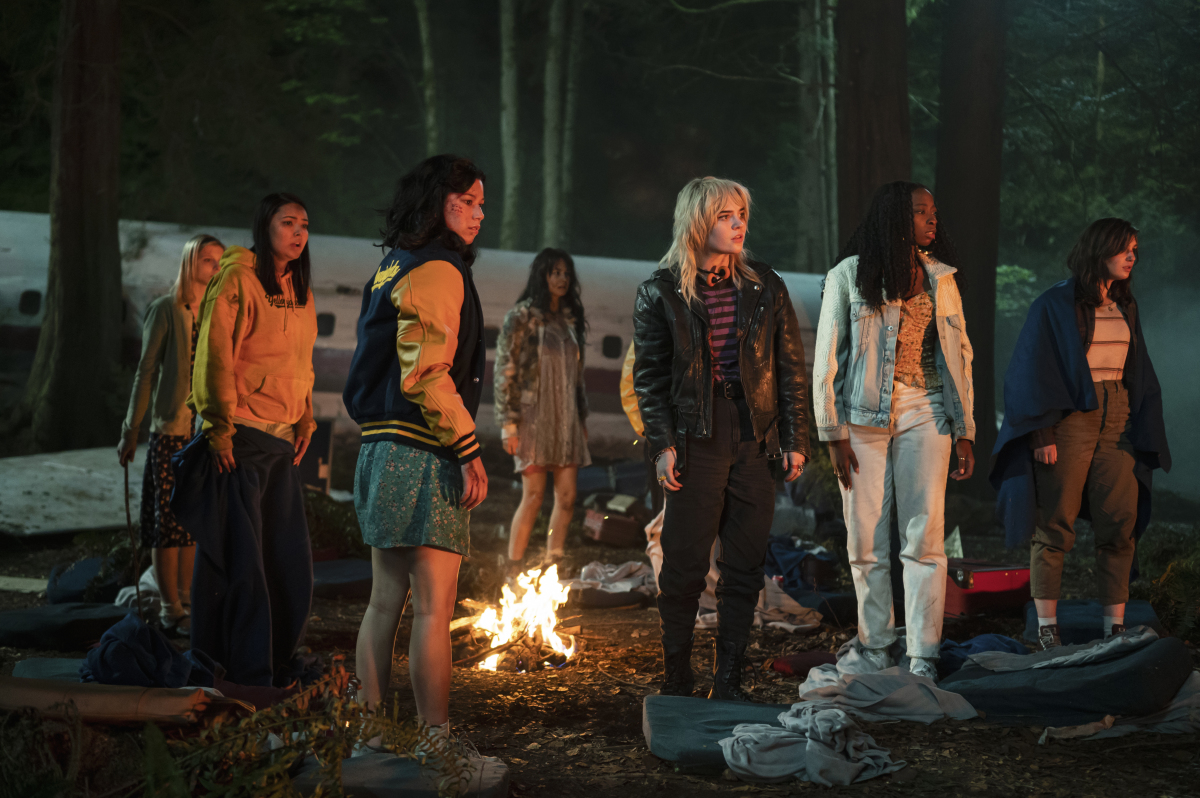 By now you’ve probably heard about Showtime’s latest genre-bending series, Yellowjackets, which premiered in November 2021. Showtime recently renewed it for a second season, and the debut season finale is on Sunday, January 16, 2022. Filled with 90s flashbacks, Yellowjackets follows a high school girls’ soccer team’s plane crash “in the remote northern wilderness. Twenty-five years later, they discover that what began in the wild is far from over.” We’ve put together a list of 7 recent/current shows like Yellowjackets to check out after season one comes to an end.

The Wilds (2020 – )
One of the most obvious comparisons is Amazon Prime’s The Wilds which debuted in 2020, and season 2 is on the way. “A group of teen girls from different backgrounds must fight for survival after a plane crash strands them on a deserted island. The castaways both clash and bond as they learn more about each other, the secrets they keep, and the traumas they’ve all endured. There’s just one twist to this thrilling Drama – Coming of Age… these girls did not end up on this island by accident.”

Cruel Summer (2021 – )
Freeform’s Cruel Summer also contains flashbacks to the 90s and lots of mystery. “In a small Texas town, popular teen Kate, is abducted. Seemingly unrelated, a girl named Jeanette goes from being a sweet, awkward outsider to the most popular girl in town, but by 1995 she has become the most-despised person in America.”

Where to watch: Freeform, Hulu

The 100 (2014-2020)
The 100 recently ended its 7 season run, giving you plenty of TV to binge. “Set ninety-seven years after a nuclear war has destroyed civilization, when a spaceship housing humanity’s lone survivors sends one hundred juvenile delinquents back to Earth, in hopes of possibly re-populating the planet.”

Brand New Cherry Flavor (TV Mini Series 2021)
If you’re looking for more bizarre, dark, thriller themed shows set in the 90s, the mini series Brand New Cherry Flavor is a perfect match. “Lisa Nova, an aspiring film director in the sun-drenched but seamy world of 1990 Los Angeles, embarks on a mind-altering journey of supernatural revenge that gets nightmarishly out of control.”

Dark (2017-2020)
Netflix’s German thriller series Dark is filled with many twists and recently concluded in 2020. “A missing child sets four families on a frantic hunt for answers as they unearth a mind-bending mystery that spans three generations.”

The Flight Attendant (2020 – )
HBO Max’s The Flight Attendant starring Kaley Cuoco is officially coming back for season 2. “Flight attendant Cassandra Bowden wakes in her hotel room in Bangkok, hungover from the night before and with a dead body lying next to her. Afraid to call the police, she continues her morning as if nothing happened, joining the other flight attendants and pilots traveling to the airport.”

Where to watch: HBO Max, Crave

Midnight Mass (TV Mini Series 2021)
Another mini series, Netflix’s Midnight Mass takes supernatural horror to a new level. “A young man returns to his isolated hometown on Crockett Island hoping to rebuild his life after serving four years in prison for killing someone in a drunk-driving incident. He arrives at the same time as a mysterious, charismatic young priest, who begins to revitalise the town’s flagging faith.”

Check out our interviews with Yellowjackets cast here.