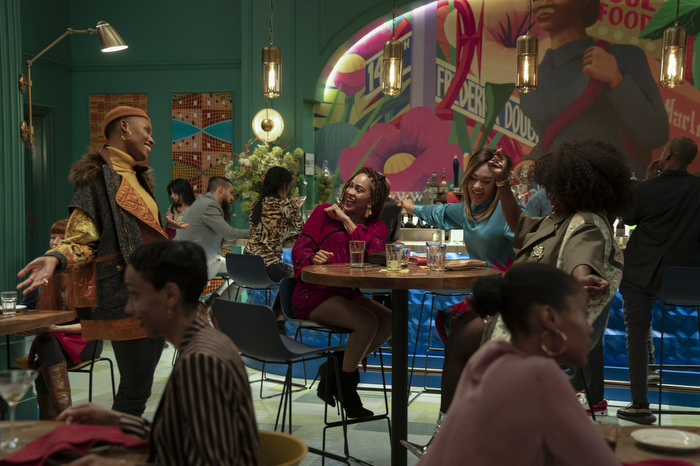 We had the pleasure of speaking with Meagan Good and Jerrie Johnson on the Popternative show about the new series Harlem, premiering on December 3rd on Prime Video. The series stars Meagan Good as “Camille,” Grace Byers as “Quinn,” Shoniqua Shandai as “Angie,” Jerrie Johnson as “Tye,” and Tyler Lepley as “Ian.” Additional recurring guest stars include Whoopi Goldberg as “Dr. Elise Pruitt,” Jasmine Guy as “Patricia,” Andrea Martin as “Robin,” Robert Ri’chard as “Shawn,” Juani Feliz as “Isabela,” Kate Rockwell as “Ana,” and Sullivan Jones as “Jameson.”
Image courtesy of Amazon Studios

Created, written, and executive produced by Tracy Oliver (Girls Trip), Harlem is a new single-camera comedy following four stylish and ambitious best girlfriends in Harlem NYC, the mecca of Black culture in America. Camille (Meagan Good) is a popular young anthropology professor with extensive knowledge of the dating norms of many cultures, but has a hard time navigating her own love life; Tye (Jerrie Johnson) is a successful, queer dating-app creator who prefers keeping vulnerability—and romantic partners—at arm’s length; Quinn (Grace Byers) is a hopeless romantic and trust-fund fashion designer who is trying to give back to the world while running a struggling business; Angie (Shoniqua Shandai) is a confident, vibrant, and filter-free singer and actress who also lives rent-free and fabulously with Quinn. Together, they level up from their 20s into the next phase of their careers, relationships, and big city dreams.

In our interview, Meagan Good talks about what we can expect from the series, including the powerful component of friendship.

Jerrie Johnson discusses her character, Tye, who will instantly become a fan favourite with viewers – we just know it!