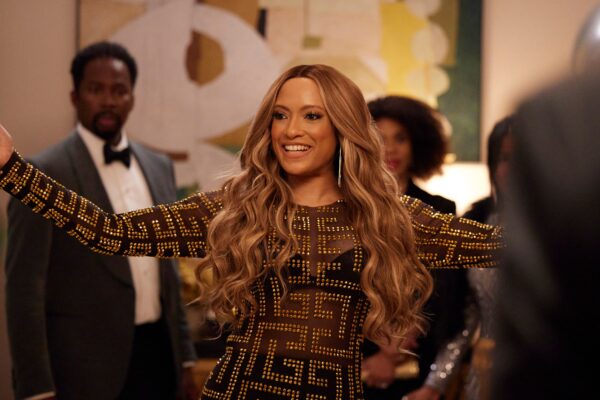 A story that began in 1999 will be embarking into its final chapter by the end of the year. The Best Man film is being turned into a 10-episode series titled The Best Man: The Final Chapters coming to Peacock’s streaming service in December.

Malcolm D. Lee returns as writer and director along with the original cast stepping back into their roles. Taye Diggs, Terrence Howard, Harold Perrineau, Morris Chestnut, Sanaa Lathan, Nia Long, Melissa De Sousa and Regina Hall are all slated to appear in the series with the official synopsis stating, “relationships evolve and past grievances resurface in the unpredictable stages of midlife crisis meets midlife renaissance.”

In first look photos, Jordan (Long) is all smiles opposite a mystery man at a tropical location. Is this a new relationship for her? Jordan and Shelby (De Sousa) also appear to be on that same island very happy to see someone not pictured. In another released photo, a call back to that infamous card playing scene in the first Best Man film is depicted.

The Best Man premiered in 1999 as mentioned before and followed Lance (Chestnut) getting married to his college sweetheart Mia (Monica Calhoun). The event brought together old friends on the brink of a controversial book release from Harper (Diggs) which revealed a salacious secret that almost stopped the wedding. 14 years later, the sequel, The Best Man Holiday, brought the friends back together during the holiday season as faith, family, and football became the central themes of the film as new secrets and heartbreaking revelations emerged.

The Best Man: The Final Chapters will stream on Peacock Thursday, December 22.

Are you excited to see the characters from The Best Man franchise again? Share your thoughts in the comments below.