Home / Entertainment / Review: ‘The Menu’ Serves Up a Poignant Dish of What Happens When You Lose the Joy of Cooking 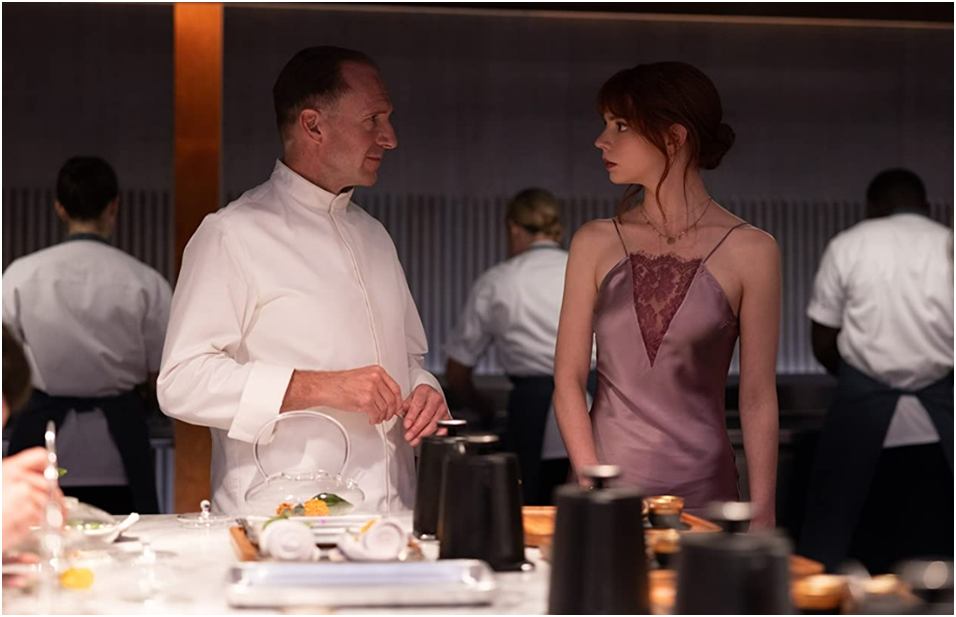 I watch a lot of cooking shows but wouldn’t even begin to call myself a foodie. I watch as the cooks and bakers prepare intricate edibles, and the judges use convoluted jargon to dissect the bites. Still, after viewing one of these programs I find myself wanting to get in the kitchen and attempt to recreate one of the dishes that piqued my interest. That’s the thing about cooking, no matter what you like to digest, one fact remains that unites us all: we need food for survival. But what happens when you make food your livelihood and that passion fizzles out? Get ready for a slew of cooking puns and The Menu spoilers ahead some may find disturbing in nature.

Mark Mylod takes the directing helm in The Menu penned by Seth Reiss and Will Tracy. The film follows an elite group of one-percenters who travel to a remote island for the opportunity to dine at Hawthorne owned by Chef Slowik (Ralph Fiennes), his maître d’Elsa (Hong Chau), and a devoted line of cult-minded chefs who respond with a resounding “YES, CHEF” whenever an order is clapped at them. This dining experience usually will cost $1250 a head, but in The Menu, the guests are in for a priceless outing.

Once on the island the guests are checked in by Elsa (Chau) and given a tour of the facilities and a peek into how the operations are run on the island, an opportunity Slowik fanboy Tyler is eagerly snapping to commemorate. The tension is evident on screen and you can sense something is off with the environment closing in inside the restaurant, but not to what extent, especially when a big fuss is made with Margot being there since she was a last-minute substitute as Tyler’s date. An ingredient that will not blend well with the meal intended.

After being ushered into the facility, the seven-course meal begins (if you can even call it that). The cinematography by Peter Deming and production design by Ethan Tobman transports viewers in an elaborate observation of decadence as the guests eat food as pretentious as their critique of it. The stunning camera work and showmanship of the plating is exquisite, but it’ll leave you asking yourself: is this how the rich want to eat? Does this equate to status?

Going into this movie with the title given I thought it was going to be as simple as the customers becoming the meal in a twisted game that will turn the eaters into food, but the realization was much more poignant. As the night went on, it’s revealed Chef Slowik intends to not only kill all the patrons in attendance, but himself and his entire staff in an elaborate murder-suicide pact. Chef Slowik has been tarnished by the food industry and believes the people in the room contributed to his spiral of falling out of love with cooking. Their secrets and sins, according to Slowik, are literally served to them on a silver platter as the group each come to terms with their pending demise. Slowik also comes to a few realizations of his own as his disgraced past is examined for peer ridicule. When you fall out of love with what you do, Slowik’s solution is not to pivot, but to burn it all to the ground and take everyone who played a part with him.

Since Margot was never supposed to be a part of this twisted end, she stumbles on a way of leaving the restaurant uncooked. (Slowik really does cook his guests in beautifully torched makeshift S’mores including chocolate caps that melt on their privileged heads as their marshmallows shawls liquify into their bodies. It is a sight you’ll never forget.) While roaming the grounds Margot finds Chef’s private quarters where a shrine of his accomplishments is on display including a photo of him during his humble beginnings flipping burgers proudly as a line cook. Before dessert is served, Margot decides she’s unpleased with the food and metaphorically wants to send it back. She comments on how unappetizing the food has been all evening and how it has left her unsatisfied. She requests something off the menu…a burger, medium well with American cheese and crinkle-cut fries. YUM!

This is a notion very pleasing to Chef and we see him give a rare smile as he’s carefully constructing the burger. Margot broke the trance for a bit and gave Slowik a delightful last supper treat, a customer who actually enjoys something he prepared with the intention of gaining nothing from it but nourishment, something he clearly hasn’t experienced in a while. After a few bites, Margot requests a doggy bag and is permitted to leave.

Performance wise there were not too many stand outs which is bizarre when you have such a cast filled with stellar Hollywood talent. All that star power and they were used as pointless ingredients to further the storyline along. Since we didn’t get much time to get into their backstories, what happened to them really didn’t matter. There was no time to get invested. If I had to pick a compelling pair to watch, it would be Ralph Fiennes’ stoic demeanor sparing Anya Taylor-Joy’s morose grip on the situation at hand. Hong Chau also delivered an interesting performance knowing she’s in a dire setting but maintaining loyalty and decorum until her bitter end.

I honestly found this film’s ending to be very depressing. Falling out of love with what you do by allowing outside factors to deter you so much that it consumes you, makes you bitter because the accolades no longer mean anything and you feel the only way out is to purge it all. It’s a sad way to leave a career that once made you so passionate.

Overall, The Menu was a fine dining film that had some parts that left me craving for more, but unfortunately, I wouldn’t request seconds. However, you’ll leave the theater wanting a cheeseburger. Bon appétit.

The Menu is now playing in theaters.