Home / Entertainment / Review: A Family’s Dream Home Becomes a House of Horrors in Netflix’s ‘The Watcher’ 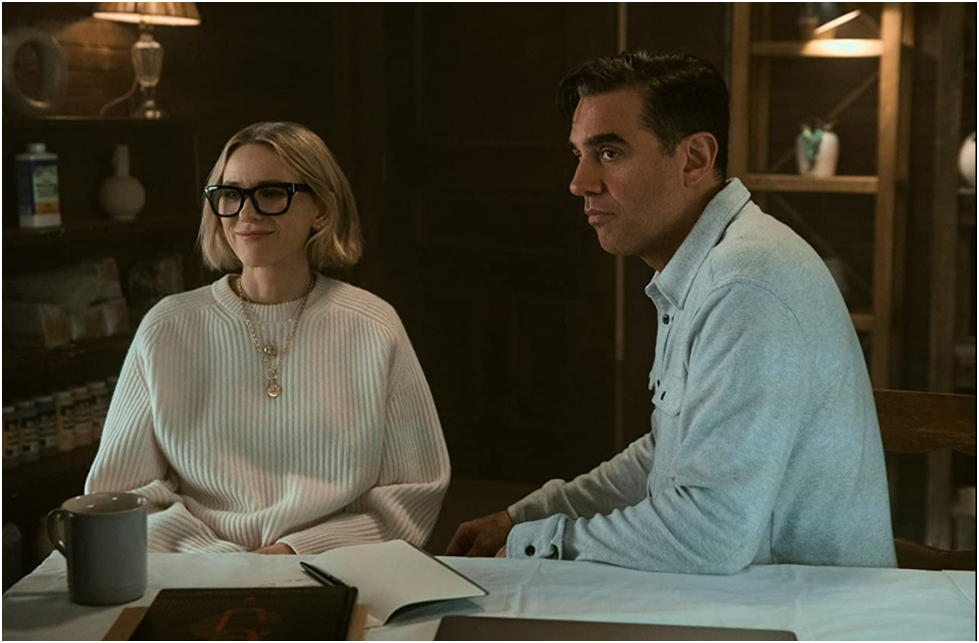 This review contains spoilers*
For many, a goal in life is to be able to purchase a dream home for your family; but what happens when that idyllic lifestyle you’ve curated for yourself begins to fall apart when a mysterious stranger and many outside forces are determined to turn your dream into a nightmare? That’s the case for the Brannock Family in the new Netflix horror-drama The Watcher.

Creative partners Ian Brennan and Ryan Murphy (Dahmer- Monster: The Jeffrey Dahmer Story, The Politician, Hollywood, Scream Queens, Glee) have joined forces again to create The Watcher, a 7-episode series based on a true story about a married couple who move into their dream home with their two children and soon after start to receive terrifying and threatening letters from an unknown voyeur who calls themselves “The Watcher,” voiced by Warren Sroka. The series stars Naomi Watts, Bobby Cannavale, Mia Farrow, Jennifer Coolidge, and many others making it a compelling cast to watch but with a lackluster follow through. Here’s why.

In The Watcher, Nora and Dean Brannock (Naomi Watts and Bobby Cannavale) are determined to move out of the hectic life of New York City and into the quieter Westfield, New Jersey where their kids, Ellie (Isabel Gravitt) and Carter (Luke David Blumm), can have their own rooms and live in an environment so safe they don’t even have to lock their front door. The family goes to an open house and falls in love with 657 Boulevard. Little do they know, so does everyone else. Nora and Dean put all their assets and money together to purchase the $3.3 million dollar home. Upon moving in and planning for mild renovations, the family begins to receive creepy letters from someone who signs the ominous notes as “The Watcher.”

The real-life case begins in 2014 when Derek and Maria Broaddus move into the Westfield, N.J. home with their three small children and the six-bedroom home costing them 1.3 million. A few days after closing, they begin to get letters from The Watcher who includes personal details about the owners in the letters also claiming the home needs “young blood,” a tidbit also highlighted in the Netflix series. Previous homeowners John and Andrea Woods were contacted by Derek and while they too were contacted by The Watcher, they only received one letter during their time in the house, while The Broaddus family received several. A police report was filed, neighbors were suspected, but no true resolution came from the devious letters.

Many of the occurrences in the show happened identical to the actual case, but other frightening additions like the John Graff character served to further the sinister circumstances of the house. Graff was a previous owner and murdered his family in 657 Boulevard. The incident resembles that of John List, a mass murdered who killed his family in Westfield, N.J. and disappeared much like John Graff in the show.

Both families had troubles putting the house back on the market once the issue with The Watcher were revealed. Eventually, they were able to sell the home. In real life, The Broaddus family is trying to move past the traumatic experience they had while living in the home, but in The Watcher, Nora and Dean become the new voyeurs of 657 Boulevard who can’t seem to leave the house and the events that happened in it behind. Just like the real case, the identity of The Watcher is still a mystery by the time the credits roll.

The Watcher series does a good job at adding a new level of mystery to the story by introducing a slew of characters that could be the anonymous letter writer. The neighbors in this show are unapologetically domineering and incredibly intrusive in how they think 657 Boulevard should be managed. Pearl Winslow (Mia Farrow) is president of the Westfield Preservation Society and takes every opportunity she can to inform the Brannock Family how unneighborly they are. Her brother Jasper Winslow (Terry Kinney) has a fixation on the dumbwaiter in 657 Boulevard and frequently takes it upon himself to enter the home and roam around because the previous owners let him. Husband and wife Mitch (Richard Kind) and Maureen aka Mo (Margo Martindale) are by far the worst neighbors aggressively asserting their ideals of the house and community on The Brannock family while creepingly keeping an eye on them.

Theodora Birch (Noma Dumezweni) plays a cancer-stricken private investigator hired by Dean to find out the secrets of the house. Although she becomes a prime contender for The Watcher, she eventually does the Brannock family a kindness in her final days regarding the case. John Graff (Joe Mantello) and Andrew Pierce (Seth Gabel) are previous owners and Roger Kaplan (Michael Nouri) is an admirer of the house who all have integral parts of 657 Boulevard’s history. Dakota (Henry Hunter Hall) is a gamer who installs surveillance cameras for the Brannock family and ends up in a relationship with Ellie Brannock. Lastly, Detective Rourke Chamberland (Christopher McDonald) heads the case of The Watcher but allows his own biases to widen the rift between himself and The Brannocks.

The side characters made this series so much more enjoyable and watchable. I was most tickled by Mia Farrow’s character. I’ve been a fan of Farrow since Rosemary’s Baby and I enjoy seeing her still getting roles where she shines. She played the wacky neighbor so well and anytime she interacted with a member of The Brannock family was unintentionally comedic gold.

The show wasn’t about Jennifer Coolidge, but I’d watch a Netflix series all about her character. Coolidge played Karen Calhoun, an unhinged real estate agent and cordial friend to Naomi Watts’ Nora character. Karen was yet another person in Westfield obsessed with 657 Boulevard and through her gaslighting was able to become an owner of the coveted property – for a bit. In the series she too becomes a victim of The Watcher and moves out promptly. Whenever Karen came on the screen though you knew it was going to be a laughable moment that made you want more scenes with her. Many of the standout moments from The Watcher came from Jennifer’s character. She made you forget you were supposed to be submersed in a thriller; even in the spooky parts with Karen you couldn’t help but to laugh. The show wasn’t even about her but Karen was the star.

I went into The Watcher knowing nothing about the case, so I was intrigued by the mystery of it all even though it was a true situation that actually terrorized a family. I had a level of empathy for them because the Broaddus family did invest in a home hoping it would be a place to create memories, but all it did was produce trauma. If you’re like me and didn’t know the case remained unsolved, then I’m sure you were let down by the ending of The Watcher. The show focused so much on trying to identify who The Watcher was only for no definitive answer to be given. It’s left up to the audience to place their bets on who The Watcher could be and why everyone was so obsessed with this property.

The Watcher is simply something to watch if you want to stay in the loop with conversations happening on social media and want to stay up to date on the latest trending Netflix series. Am I mad I spent up to 7 hours of my time binging the show? No, but nothing memorable happened for me to give it a second thought.

The Watcher is now streaming on Netflix.