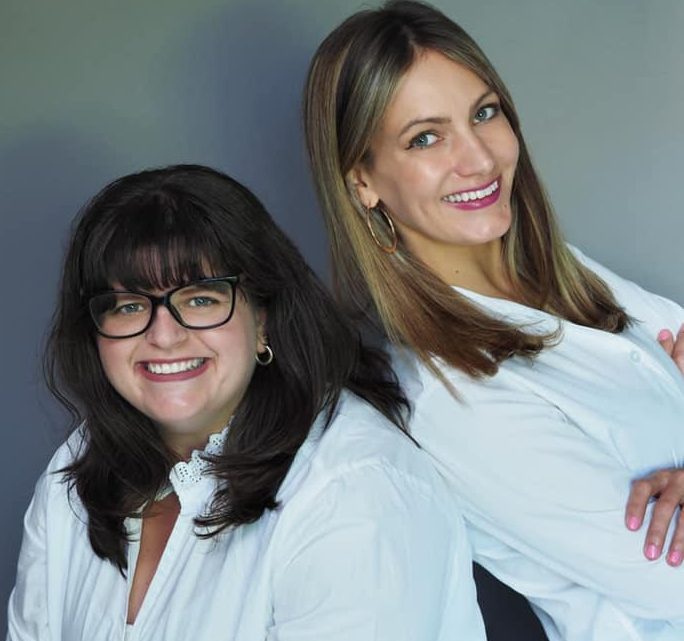 We caught up with the owners and operators of 180 Sisterhood Productions, Trish Rainone and Rebeka Herron. 180 Sisterhood is a Canadian-owned content creation company in Sault Ste. Marie, Ontario, whose recent holiday film, A Christmas Letter, premiered on December 1st on CBC, and is available to stream on CBC Gem. Check out what they had to say below about producing the film, the entertainment industry, and lots more!

What can you tell us about producing the film A Christmas Letter?

It was the biggest project we had produced under 180 Sisterhood in Sault Ste. Marie. We are so grateful to be able to have a community that supports film production, and we were grateful to be able to provide many jobs and work with local restaurants, security companies, office supplies, hotels and more. We’re still wrapping up administration duties and are relieved to see folks are enjoying the film.

What was the feeling like for you when the film finally aired on CBC and CBC Gem?

After all the hard work that’s been put into the project, it was a great feeling to be able to sit back and watch the film on CBC. Trish has had highschool friends reach out and congratulate or point out areas of Sault Ste. Marie that they loved seeing featured in the film! In highschool it would have been unheard of to make a movie here, so it’s fun to hear their thoughts and feel their excitement.

What were the biggest challenges when it came to making A Christmas Letter?

The biggest challenge was the pandemic during a provincial lockdown. Our business was deemed essential though some were not. Flights were only coming to town once a day and sometimes only once every second day. We had over 30 actors in the film and had to send a driver 8 hours there and 8 hours back for some. We also coordinated many covid tests with a local doctor and his team. Stores were closed down and we needed props, wardrobe and set design. Luckily, we had some great crew members like Kerrie De Poli, the costume designer, who worked so hard to find wonderful solutions.

What is the ideal 180 Sisterhood project you would like to work on?

We have a couple films slated for the new year that we are producing. We are also working on a passion project called Butterfly that Rebeka is directing and Trish co-wrote with actor Tyler McMaster. Both Trish and Tyler will appear as actors. It’s a coming-of-age story that deals with grief.

Did you two always know that you were going to wear many hats in the entertainment industry?

Yes. Trish knew she wanted to be an actor initially but then also wanted to tell her own stories, so she took up writing, producing and directing also. For Rebeka, she always knew she wanted to produce, write and direct. She started as a child actor in Vancouver but realized she preferred the behind-the-scenes work.

We have plans to continue making feature films, to continue pitching tv series to networks and we will hold our third annual Sault Film Festival. Season 2 of Pink Is In will be released to Bell Fibe TV in the spring of 2022, which we both work on. We will also be recording season three of our podcast, Drunk Read-Thrus. If anyone has an old script or a story they want featured, feel free to find us on the socials @180sisterhood.