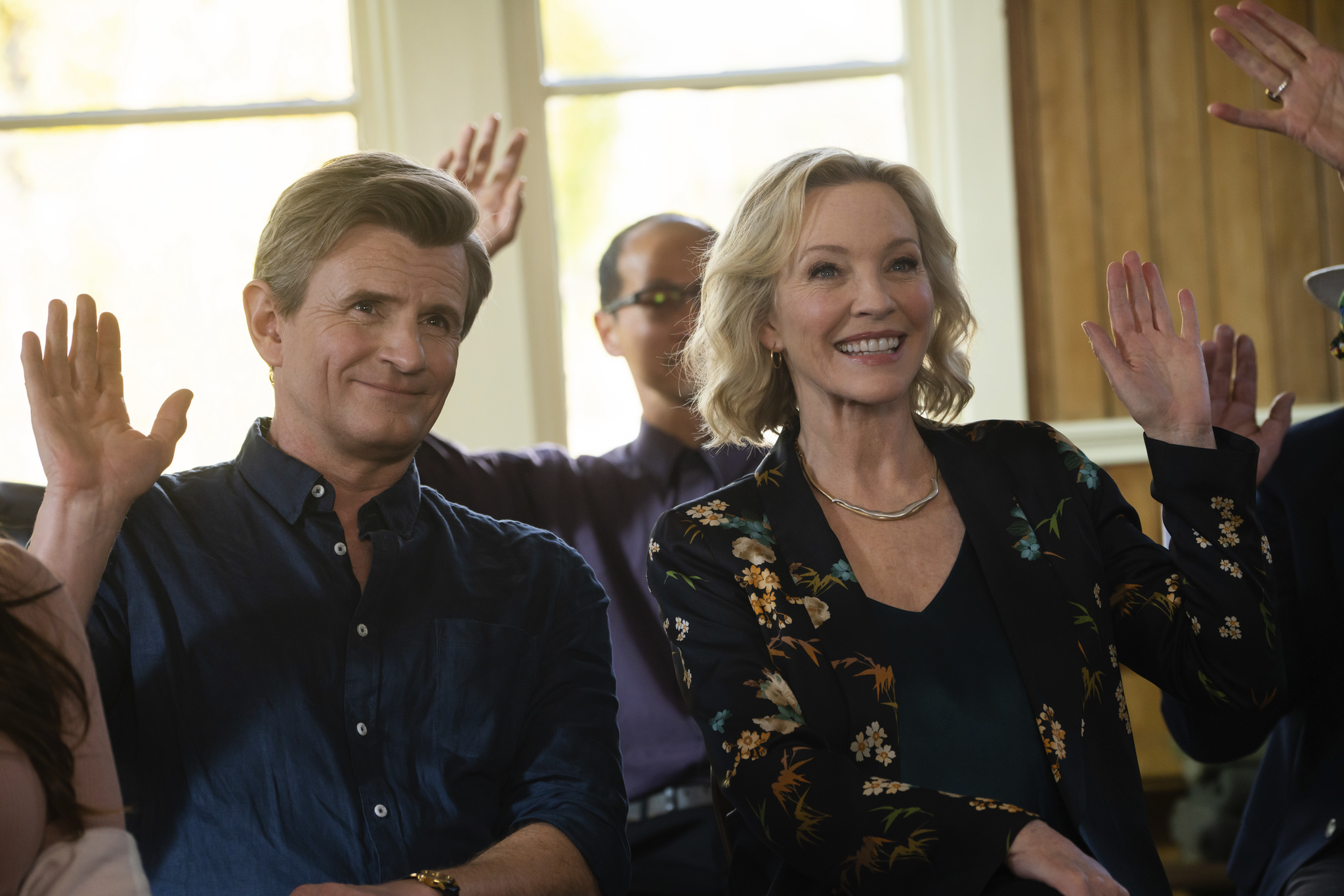 We had the pleasure of chatting with New Zealand actress Rebecca Gibney about starring in the new romantic dramedy mini series, Under The Vines, premiering on Acorn TV on December 6, 2021.

About Under The Vines
Under the Vines stars Rebecca Gibney (Wanted, Packed to the Rafters, Winter), who also executive produces, and Charles Edwards (The Crown, The Terror, Downton Abbey) as two unlikely city slickers who inherit a failing vineyard in rural New Zealand. Sydney socialite Daisy Munroe (Gibney) heads to New Zealand for a vacation at her recently deceased stepfather’s winery, which she intends to sell. Little does she know that the vineyard has a co-owner, grumpy UK-born lawyer, Louis Oakley (Edwards), who also travels to New Zealand to escape a spiraling series of unfortunate events in his life. Despite neither having done a hard days’ work in their lives and both despising each other, Munroe and Oakley must somehow make the vineyard successful so they can sell up, split up and get out.

We asked Rebecca Gibney about her acting career, what we can expect from Under The Vines, her upcoming projects, and lots more. Check it out below!

Rebecca Gibney (RG): I was kind of plucked out of my everyday life in New Zealand when I was 17.  I was doing some part time modeling and odd jobs to make money and I was randomly cast in a movie. It wasn’t something I was at all focusing on at that time. (I actually wanted to be the first female Prime Minister of New Zealand!) But luckily for me, one job led to another, and after moving to Australia in 1985 to pursue opportunities, I was fortunate to work on some amazing series that were very popular overseas – The Flying Doctors, Halifax F.P. and many others. As I have gotten older, I have realised the importance of creating my own work which has resulted in the series Wanted. (3 seasons are now streaming on Netflix).

My husband and I have a production company, R&R Productions, and we have been developing series and film ideas for a number of years now, and I have executive produced and co-produced a few television series and feature films. I love being part of the creative brain from conception to screen. It’s empowering as an actress, but also as a woman and a producer to have a strong, clear voice. I am very interested in creating fascinating and diverse characters of my own generation, as it’s become abundantly clearer the older I get that life really does begin after 40, or in my case, 50!

RG: Be prepared for rejection! It’s a tough industry and while I am very fortunate to have enjoyed a long and very stable career, it is much harder in this day and age to get a break. There are so many people wanting to be “famous.” I would suggest applying for a reputable drama school, work really hard, be a good human, show up on time and always research and study your craft. Know your lines. I work incredibly hard at what I do, but I also make sure that I treat everyone with respect, whether you are the Director or the team setting up the tents. If you are a good person to work with, you will go a long way.

RG: I had performed in a few plays at school but always in the background, as I suffered terrible stage fright and panic attacks. Hence I never thought acting would end up being my chosen profession. I had a small role in a film, but it was a children’s television series called Sea Urchins for TVNZ where I was first really bitten by the acting bug. I played a rebellious teenage girl and it was filmed on boats in a beautiful place called The Queen Charlotte Sounds at the top of the South Island of New Zealand. It was incredibly exciting for a 17 year old.

What can you tell us about Under The Vines on Acorn TV?

RG: Under The Vines has been described as “Northern Exposure with wine.” Northern Exposure was a show that I always loved because it was about fish-out-of-water characters going to a kind of kooky town and falling in love with the people and the place and learning how to fit in. Under The Vines is about two mismatched people – Louis Oakley and Daisy Munroe, whose lives have kind of fallen apart and they end up thrown together when they inherit a failing vineyard in the South Island of New Zealand. They have nothing in common – he thinks she is a vacuous idiot from the colonies and she thinks he is a boorish, pompous, up-himself git from the UK.  It’s got that slightly English sense of humour, but with a Kiwi bent and the stunning scenery that only the South Island of NZ can provide.

What can you tell us about your character in Under The Vines?

RG: Daisy Monroe is a Sydney socialite. She’s very gregarious, kind, generous and open-hearted. But she’s also a bit flaky and can be very self-centred. She adores Gucci, Chanel, Louis Vuitton and anything with a label and has had a very privileged life thanks to her stepfather, Stanley Oakley. Because she’s never had to work a day in her life (although she has dabbled in real estate, hot yoga instruction and home decoration), Daisy really just takes everything for granted, but she’s not mean spirited or unkind. She’s just never really grown up. When Stanley dies and she is left without an income other than the vineyard she’s inherited, Daisy thinks she is heading into a NZ version of Under the Tuscan Sun and is horrified when nothing could be further from the truth.

When people watch Under The Vines, what are you hoping they get out of it?

RG: I’m hoping they will be able to escape into this beautiful world with kind and funny and joyous people. That they will fall in love with the beauty of the landscape and the heart of the show. In a world that is a bit sad at the moment, I hope Under The Vines can bring a little joy. And if you like wine, that will help too!

RG: I love hiking and kayaking and pretty much being outdoors when I can. I also took up skiing when my husband turned 50 and even though I’m not very good, I absolutely love it. Pre-Covid, we visited the US a number of times – Beaver Creek, Telluride and we’ve also spent time in Canada at the resorts there. I also love to sail – another thing my husband introduced me to. When our son was young, we had a yacht and my favourite thing was to pack it up for a weekend and disappear up the waterways in Sydney. Travel is another thing I love. My husband calls me Gypsy Toes because I can never sit still.

RG: Never be late, always know your lines and don’t be a dick (idiot, twat, jerk). And practice practice practice. Read your lines over and over again until they are so entrenched in your head you can say them in your sleep. It’s held me in pretty good stead over the last 35 years!

RG: I’m attached to two series currently in development, which will hopefully shoot in 2022 in Australia and personally I am developing a feature film with my husband and partner in R&R Productions working with an emerging NZ writer, so there are lots happening.