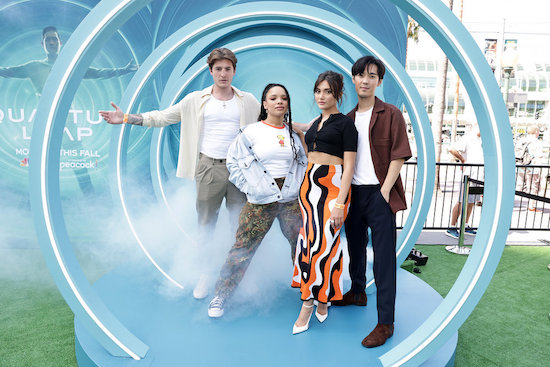 Photo by: Todd Williamson/Peacock
We were joined on the Popternative star by Kieron Moore and André Dae Kim who star in the new Peacock series Vampire Academy which premiered on September 15th. The highly anticipated series is an adaptation from the popular young adult series of novels by Richelle Mead.

Vampire Academy Synopsis
In a world of privilege and glamour, two young women’s friendship transcends their strikingly different classes as they prepare to complete their education and enter vampire society. One as a powerful Royal, the other a half-vampire Guardian trained to protect against the savage ‘Strigoi’ who threaten to tear their society apart. That is, if Royal infighting doesn’t do the job first.

Kieron Moore plays Dimitri Belikov, a vampire-human hybrid Dhampir guardian, and André Dae Kim is Christian Ozera, a Royal Moroi vampire. Dimitri is described as: “ethal, disciplined, discreet, and totally committed to his role as bodyguard to the ruling Moroi, the “good,” mortal vampires of his world.” Christian, deemed “intelligent and thoughtful,” is also “well-read and hungry for knowledge, he searches for faith-based answers and discovers a kindred spirit who is also looking for the truth.”

In our interview, we asked Kieron and André about preparing for their roles and what it was like bringing characters from books to life.