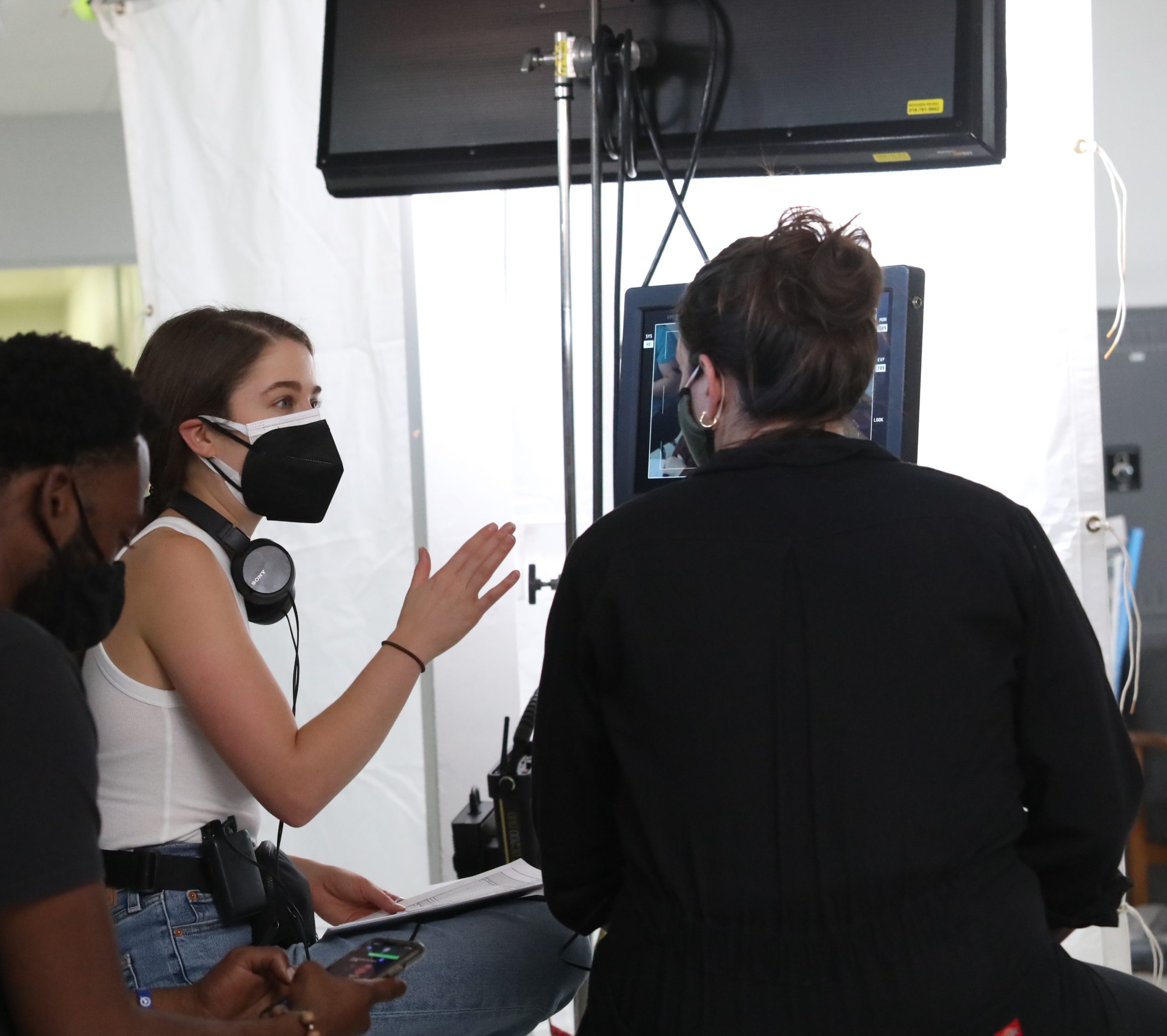 Image by: Julia Ptasznik
We had the chance to chat with actor, writer, producer and director Paige Hullett who co-directed the short film Birds, Bees, and Threes. The film has been accepted into the RiverRun International Film Festival and deadCenter Film Festival.

Logline: Julia’s trusted Triplet Support Group leader expresses the importance of teaching
their children about sex by the age of eight. Birds, Bees, and Threes comically follows Julia
and Andy Hudson and their triplet daughters as they all attempt to digest their
embarrassment, shock, and confusion after “the talk.”

When did you decide that storytelling and acting was something you wanted to do?
When I was 7 I went to see a theater performance that a family friend was in. She was in a
heated scene and sticking up for herself, and I was so invested that I stood up in my chair
and screamed, “YOU TELL HIM CARLY!” I’ll never forget that moment. It was the first time I
realized how much storytelling can really impact an audience. Although I do feel bad that I
totally interrupted a show, I knew I had discovered something special that day.

When did you decide that directing was something you wanted to do?
During lockdown, I was craving something creative to do. I’ve wanted to tell this story for a
while, and everything aligned to make it the right time to tell it. Directing was such a fun
challenge, and I learned so much going behind the camera. I also teamed up with actor and
director Margaux Susi who was my co-director. Margaux had just finished directing Anyone
But Me starring Sheila Carrasco for IAMA Theater Company, and it absolutely blew me away. I
knew she would be the perfect person to join forces with to help me bring my vision to life
and elevate the project.

What can you tell us about Birds, Bees and Threes?
It is based on a true story from my childhood growing up as a triplet in Indiana. In the
summer of 2019, my writing partner Gunnar and I road-tripped from Atlanta to Los Angeles.
During our time in the car, we were inspired to write this short as our first project together.
Birds, Bees, and Threes is a personal story that centers around a key moment from my
childhood. It is filled with humorous and painfully awkward moments and, most importantly,
it highlights the need for proper sex education through comedic storytelling.

How excited are you to have the film run at RiverRun International Film
Festival and deadCenter Film Festival?
Very excited! We had our world premiere at RiverRun, which was wonderful. It was held in
Winston-Salem, the city where Gunnar and I met, so that made it extra special. I was lucky
enough to have my family meet me there, and it was such a treat to have them experience
an audience watching our story with them. They are my biggest fans. I also met 15 year old
triplets while I was there, and we were able to connect over shared experiences. It was
meant to be!

We are screening at deadCenter June 11th and 12th in the “coming of age
category.” We are grateful to continue to share our story with more audiences! If you’re in
Oklahoma City, you can grab tickets here.

What was it like working on Yes, God, Yes?
So. Much. Fun. Director Karen Maine wrote a really endearing script, and working with Karen
was actually a huge reason why I decided to make BB3. She was the first woman director I
had ever worked with, and watching her explore moments from her life empowered me to
do the same.

When people watch Birds, Bees and Threes, what are you hoping they get
out of it?
I hope it creates conversation! Many young people are not getting the sex education they
need and deserve. If viewers walk away and reflect on their own experience or how they
might talk to their own children about sex one day, my mission is accomplished!