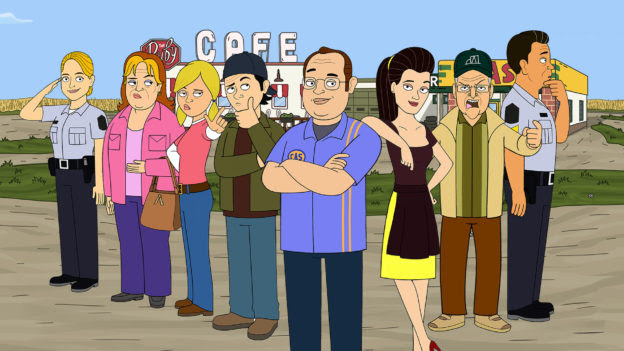 Some good news for Corner Gas Animated was released today. The series, which debuted in April, has officially been named as The Comedy Network’s number one original series:

TORONTO (June 22, 2018) – With the first season coming to a close, The Comedy Network confirmed today that CORNER GAS ANIMATED is its #1 original series of all time. Following its debut as the most-watched series premiere in the history of Comedy, CORNER GAS ANIMATED became the channel’s most-watched series this broadcast year among total viewers and all key demos (A18-34, A18-49, and A25-54), making  Comedy the #2 specialty channel in its Monday at 8 p.m. ET/PT timeslot, among all key adult demos. Already renewed for a second season, CORNER GAS ANIMATED wraps up its smash-hit debut season on The Comedy Network, Monday, June 25 at 8 p.m. ET/PT.

“Truly an audience favourite, CORNER GAS ANIMATED remained tenacious in its timeslot and officially smashed records for Comedy,” said Pat DiVittorio, Vice-President, Programming, CTV and Specialty. “Congrats to Brent and the entire team on a hugely successful debut season. We can’t wait to return to Dog River for a second season.”

Season 1 of CORNER GAS ANIMATED currently airs Sundays at 8:30 p.m. ET/MT on CTV as part of the2018 summer schedule. As well, fans can celebrate Canada Day in Dog River with a Season 1 marathon on Comedy beginning at 6 a.m. ET/PT on Sunday, July 1. All 13 episodes of Season 1 are available to stream on CraveTV beginning July 6, joining all 107 episodes of the original six-season series, CORNER GAS, as well as the feature film, CORNER GAS: THE MOVIE. Viewers can also catch up on past episodes ofCORNER GAS ANIMATED on demand through Comedy GO and TheComedyNetwork.ca.