Home / Entertainment / Cobra Kai: Up and Coming Characters Get Spotlight Moments in Season 3 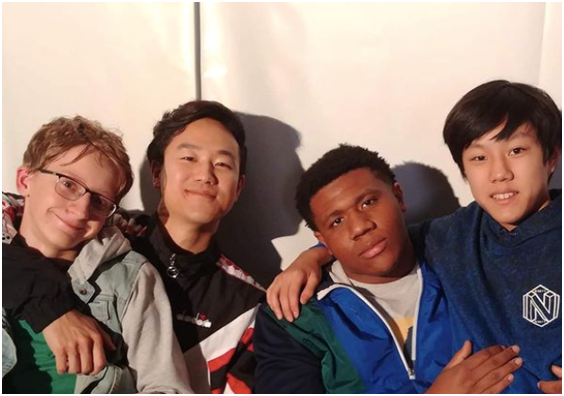 Image credit: oh.nate/@Instagram
Not all characters in the Cobra Kai universe get the same amount of screen time in the show as the stars do, but there are moments where the less appreciated characters solidify their places in our hearts. Spoiler warning if you haven’t watched Cobra Kai yet!

When Nate, (played by actor Nathaniel Oh) first appeared onscreen, he was just an average kid, probably just a nerd as Johnny Lawrence would say. Throughout the series, we saw him grow as an individual. He transformed himself from a nerd into a foul-mouthed warrior. Looking back in the series, Nate had several memorable moments.

His signature moment came when he showed up at Sam LaRusso’s house after getting ambushed by Cobra Kai and said “They kicked the f******g s**t out of me!”. In our interview, we discussed that scene with actor Nathaniel Oh and he said “I think I had the only f-word in the entire season.” He also added, “When I saw the script, I was freaking out because I had to say the f-word while my mom was sitting like 20 feet away.”

Although the comedic timing of that scene was great, it played a larger role in the grand scheme of things. The attack on Nate is what led to Sam LaRusso to advocate for the reopening of Miyagi-Do. So maybe we never would have seen Miyagi-Do reopen if it wasn’t for Nate? However, my personal favourite though is when Nate said to Bert, “If you died, I wouldn’t even attend your funeral.” Every time I re-watch Cobra Kai, I look forward to that part because it shows how cold-hearted Nate has become.

Equally important to the Cobra Kai universe is Nate’s counterpart, Bert (played by actor Owen Morgan). Similar to Nate, Bert joined Cobra Kai looking for a place to belong.  After spending some time as a member of Cobra Kai, we witnessed his signature moment in season 3. Of course, some could argue that getting thrown through the window was Bert’s signature moment, but I believe when Bert disobeyed Kreese and refused to feed the mouse to the snake, that was his defining scene. It showed Bert’s true humanity.

In our interview with Owen Morgan, when asked about that scene he said “I guess Marty [Martin Kove who plays John Kreese] has a pretty intimidating presence, he [the mouse] kept relieving himself. “ I don’t blame that mouse at all; most people probably would have done the same thing. My personal favourite Bert moment though was when he had to correct Johnny Lawrence and let him know that a mongoose can kill a cobra. That line had layers to it. It subtly suggests that looks can be deceiving, which is definitely a great metaphor for Bert’s character.

You can watch the full interviews below! Be sure to also check out our interviews with other Cobra Kai cast members here.