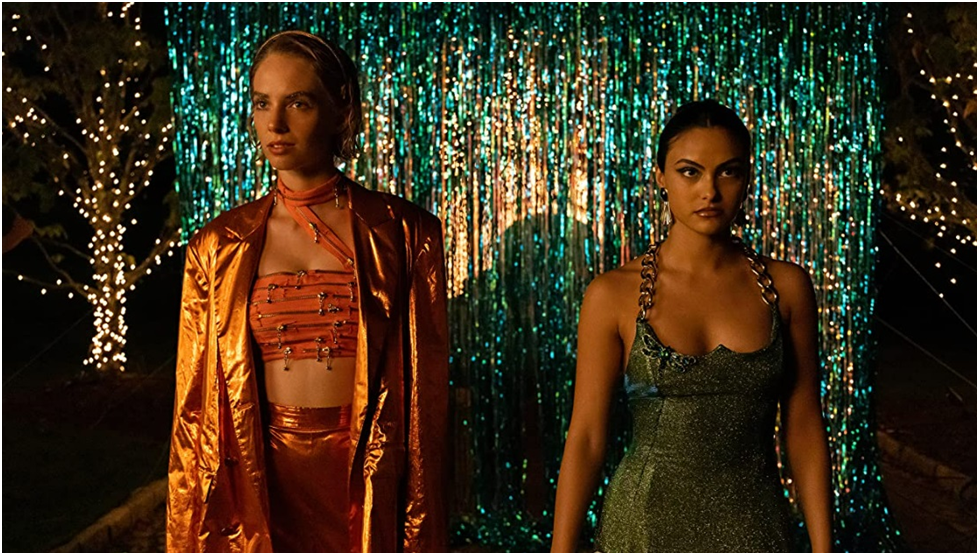 Maya Hawke and Camila Mendes star in the Netflix dark comedy Do Revenge directed by Jennifer Kaytin Robinson which is now streaming globally.

The official synopsis reads: “popular Drea wants revenge on her boyfriend for publishing her sex tape, and exchange student Eleanor is haunted by a rumor. When they’ve done you wrong, don’t just get even. Do Revenge.” Drea (Mendes) and Eleanor (Hawke) vie to go undercover and get revenge for one another to stay under the radar at the lush Rosehill Country Day Prep School. What is it about high school that brings out the revenge in us all?

Do Revenge is a vibrant, campy tale of getting even filled with jokes that will keep you laughing, twists that will keep you guessing until the end, and costumes you wish were in your closet (shout out to costume designer Alana Morshead). The only bad thing I have to say about this movie is while Sophie Turner was perfectly used in the film, I wanted more of her character. The few scenes she had were comedic gold and she was grossly underused.

Nonetheless, the theme of revenge and high school is nothing new, and there are several films for you to get into if you enjoyed Do Revenge. Here’s 6 high school themed movies centered around payback for you to check out after Do Revenge.

Synopsis: “Three ex-girlfriends of a serial cheater set up their former lover to fall for the new girl in town so they can watch him get his heart broken.”

Where to watch: Starz, Hulu

Synopsis: “Three of the most popular girls at Reagan High accidentally kill the prom queen with a jawbreaker when a kidnapping goes horribly wrong.”

Synopsis: “At Westerburg High where cliques rule, jocks dominate and all the popular girls are named Heather, it’s going to take a Veronica and mysterious new kid to give teen angst a body count.”

Synopsis: “Cady Heron is a hit with The Plastics, the A-list girl clique at her new school, until she makes the mistake of falling for Aaron Samuels, the ex-boyfriend of alpha Plastic Regina George.”

Where to watch: Netflix, Prime Video

Synopsis: “A newly-possessed high-school cheerleader turns into a succubus who specializes in killing her male classmates. Can her best friend put an end to the horror?”

Synopsis: “A rebel girl signs up a group of cheerleaders to help her take down the captain of their high school football team, but a supernatural turn of events thrusts the girls into a different battle.”

Do Revenge is streaming now on Netflix.

*Note: Where to watch the films are available on the platforms at the time of this post.