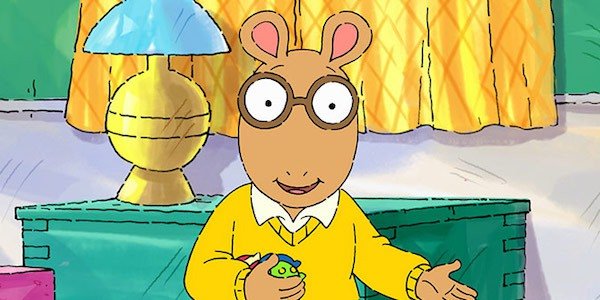 Arthur is currently the longest running animated series for children in the U.S (first airing in 1996) with just over 245 episodes. For many, Arthur was (and is) part of the after-school ritual of enjoying a snack in front of the TV after a long day. Besides creating relatable and hilarious storylines, Arthur has had quite the celebrity guest appearances, making episodes even more memorable. Here are our picks for the top 10 guest appearances:

1.) Art Garfunkel lends his singing voice in an early episode as a Moose who provides a live soundtrack to Buster’s life.
Season 3, Episode 2: The Ballad of Buster Baxter (1998)

3.) Alex Trebek self-parodies as Alex Lebek, a gameshow host on RiddleQuest, which Arthur is a contenstant on.
Season 5, Episode 1: Arthur and the Big Riddle (2000)

4.) Mister Rogers appeared as himself on one of the early seasons as a friend of Arthur’s family who was staying with them while visiting. The episode aired in 1997, but still remains one of the most touching and memorable episodes of the series.
Season 2, Episode 1: Arthur Meets Mister Rogers (1997)

5.) All five members of The Backstreet Boys appeared as themselves animated in an hour-long episode special. BSB put on a concert for Elwood City, including a performance with Arthur and his buddies. BSB also sung the opening theme song for the episode.
Season 7, Episode 1: It’s Only Rock ‘n’ Roll (2002)

6.) Yo-Yo Ma and Joshua Redman have a musical duel at Elwood City’s library. Besides the amazing music in this episode, it is also memorable for D.W’s line where she refers to Yo-Yo Ma as “Yo Mama”.
Season 4, Episode 10: My Music Rules (1999)

7.) Matt Damon voices himself on a special episode of Arthur where he launches “Postcards for You” asking the kids of Elwood City to send in short video clips to air on TV. Spoiler: He selects George’s video.
Season 11, Episode 6: The Making of Arthur (2007)

8.) Idina Menzel doens’t sing or play herself in her guest appearance role. She plays a therapist, Dr. Paula, who helps Brain deal with anxieties and his emotions after a hurricane hits Elwood City. This was a really important episode for kids to watch.
Season 18, Episode 10: Shelter From the Storm (2015)

9.) Michelle Kwan makes an appearance as her figure skating self and helps Francine become a team player instead of a sore loser.
Season 6, Episode 9: The Good Sport (2002)

10.) Jack Prelutsky is the first celebrity to guest star on Arthur as himself and was the judge in Elwood City’s poetry contest. Interestingly, he is the only guest star to look very different than his animated character, and looks like a “regular” Arthur character.
Season 1, Episode 28: I’m a Poet (1996)