Home / Digital Media / Zala The Cursed Vol. 2: A Mother’s Will – The Playlist 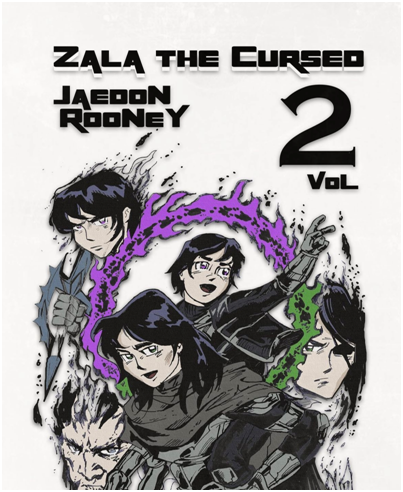 In recent years, anime and manga has been very popular among Gen Z. As a millennial, when I was younger, people often made fun of the kids that were very into anime series like Dragon Ball Z. Like most things, it was branded “weird” because it was different.

For years, I had that same assumption that only the shy, socially awkward kids watched anime. I
mean, we all know a few kids that were doing the Naruto run in the halls between classes.

As I got older, my brother Jaedon showed me a different side of the anime world. Soon after that I saw tons of other kids, especially young black kids, being more open about their love of anime and manga. Even I gave it a shot! I wouldn’t be as bold as to call myself a “fan”, but my personal favorite is Cowboy Bebop because of the music, naturally.

However, my brother took it a step further and created a manga series of his own called Zala The Cursed. Zala The Cursed which explores the themes of family, betrayal, and finding one’s identity, and is something we can all relate to. From November 18th – 20th, my brother is at his second Anime NYC in New York City selling Volume 2.

When speaking to Jaedon, I asked him what else gave him inspiration to create Zala The Cursed. He explains that music heavily influenced him and put him in the mind state to conceptualize the world of Zala The Cursed. Growing up, I always knew that he loved listening to movie soundtracks, so it adds up.

Check out the playlist below and hear some of the songs that inspired Zala The Cursed.

After growing up and working in the entertainment business, Tiffani Rooney considers herself a
pop culture and music connoisseur. Her blog @eliteurbanite encompasses everything from
throwback cartoons, current fashion trends, music samples, and everything in between. In her
day to day life she works in marketing for AT&T, but in her free time she’s either hiking or
practicing her DJ skills!