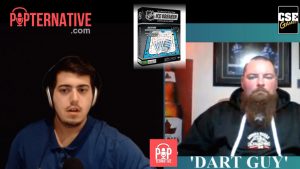 Thrilled to have been joined by internet sensation and die-hard Toronto Maple Leafs fan Dart Guy! Jason aka Dart Guy talks to us about what he has been up to post internet fame including his new radio show on TSN 1050 with Todd Shapiro!

Follow Dart Guy on Twitter: https://twitter.com/LeafsMaz20 This episode has been sponsored by our official partners at CSE Games.