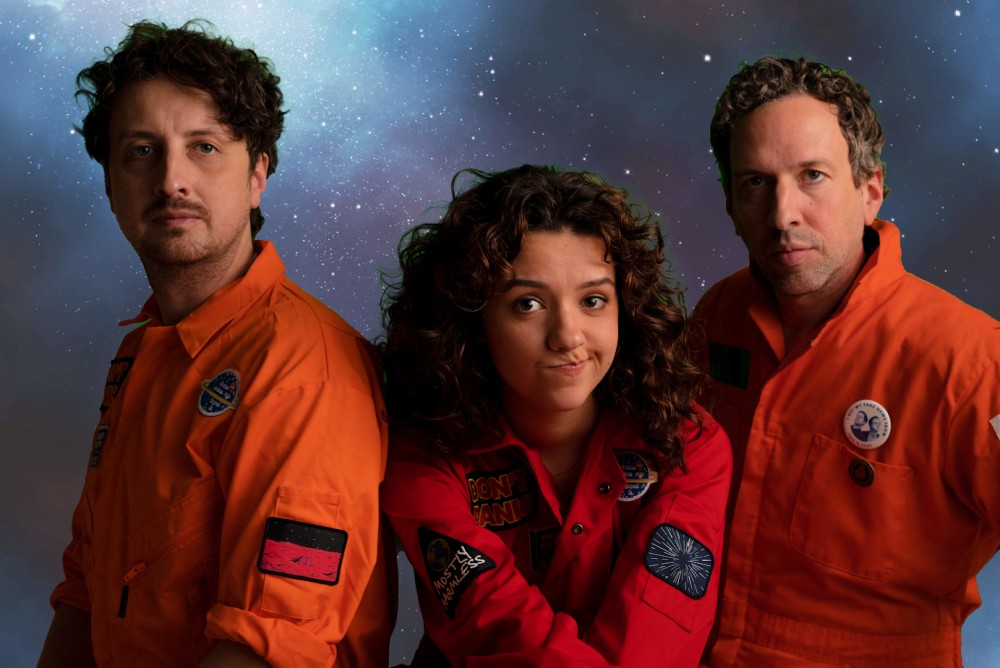 We chatted with Mark Chavez, co-host of the new CBC podcast Let’s Make a Sci-Fi, which currently has three episodes available for listening.

Let’s Make a Sci-Fi
Can three comedians create a legit sci-fi show? Comedians Ryan Beil, Maddy Kelly, and Mark Chavez are going to find out. Over eight episodes, they’ll try to write a serious, and seriously nerdy, pilot script. When they run into trouble they’ll consult Hollywood experts who have worked on things like Star Trek, Star Wars, and Firefly and science fiction superstars like Neil deGrasse Tyson, Rainn Wilson, Emily VanDerWerff and Neill Blomkamp. And in the final episode, professional actors will read their script, bringing it to life — for better or worse.

Check out our conversation with Mark Chavez below where we talk about Let’s Make a Sci-Fi, the general podcast landscape, his recent role in The Mighty Ducks: Game Changers and more.

Mark Chavez (MC): When I first began my career in comedy and theatre, the idea of storytelling was almost always a means to an end. I wanted a container in which I could write jokes, create outlandish situations, and give a home to characters I’d created. A loose story was the scaffolding to hold up these otherwise unrelated ideas. As I started developing and pitching ideas for film and television I began to appreciate and enjoy how important story is to a concept. Now when developing new projects I focus on the story first and let the comedy follow.

What can you tell us about your podcast Let’s Make A Sci-Fi?

MC: The basic gist of Lets Make a Sci-Fi is an experiment to see if three comedians can write a serious, earnest, and otherwise “good” science fiction television pilot. Not a comedy, and certainly not a spoof. We start with nothing but a blank sheet and our little minds that have only ever written comedy and over the course of eight episodes we create a show. Along the way we interview expert guests from the world of science, television, and film, and get some amazing advice, help and criticism. Basically, it’s a comedy show about people trying to write a serious show.

What do you think of the current landscape of podcasting?

MC: I could be way off base here, but I think they are taking over every artistic medium and soon, for better or worse, we will only have podcasts. Say goodbye to television, film, dance, music of every type, you name it, all that will be left in a few short years are podcasts. You won’t say “we’ve got tickets to the opera tonight” you’ll say “we’ve got tickets to the podcast tonight”, and instead of saying “how about dinner and a movie?” you’ll say “how about we eat a podcast and then cozy up in front of a podcast?”.

You had a fun role in The Mighty Ducks: Game Changers on Disney+. What was it like playing that character?

MC: Wow thanks for noticing! I have one of those blink and you’ll miss me parts on The Mighty Ducks. I played a character, Terry, whose daughter is the host of – get this – a podcast that covers the games of the junior hockey league. Terry knows nothing about hockey so I needed to convey that, which wasn’t too much of a stretch. It was incredibly fun to do. I got to sit and watch these really really good hockey players do stunts all day. I loved it.

What are you hoping people get out of Let’s Make A Sci-Fi when they listen to it?

MC: At the very least, I hope it offers some background noise to fill the silence while they are making dinner or on their morning commute. At the most, I hope that they are a big-time producer, they fall in love with us as a writing team, buy our project, and we all make an incredible sci-fi together.

Listen to the Let’s Make A Sci-Fi podcast here